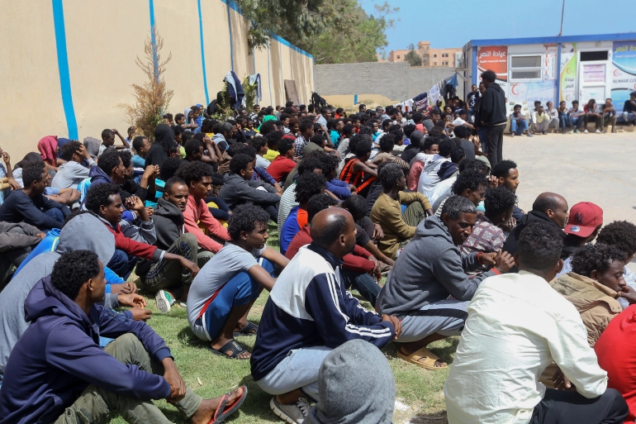 Amnesty said the EU did not pressure Libyan authorities to respect the rights of refugees and migrants [File: Mahmud Turkia/AFP]

A prominent rights group has called on the European Union to reconsider its cooperation with Libya over “horrific abuses” being committed against refugees and migrants in the North African country.

In a new report published on Thursday, Amnesty International criticised the EU and its member states for supporting the Tripoli-based Government of National Accord (GNA) and its coastguard in its efforts to intercept refugees and migrants at sea and take them back to Libya.

Oil-rich Libya has become a key route for refugees and migrants wanting to reach Europe in the chaotic years since the 2011 overthrow and killing of longtime ruler Muammar Gaddafi in a NATO-backed uprising.

The International Organization for Migration and many others have long warned that it is not safe for migrants to be returned to the conflict-ridden country.

“Instead of being protected, they are met with a catalogue of appalling human rights abuses,” said Diana Eltahawy, deputy regional director for the Middle East and North Africa at Amnesty International.

“Even in 2020, the EU and its member states continue to implement policies trapping tens of thousands of men, women and children in a vicious cycle of abuse,” she added.

“The EU and its member states must completely reconsider their cooperation with Libyan authorities, making any further support conditional on immediate action to stop horrific abuses against refugees and migrants.”

In its report, Amnesty also provided detailed accounts of cases involving the unlawful killings of migrants and refugees in Libya, as well as enforced disappearances, torture, rape, arbitrary detention and “forced labour and exploitation at the hands of state and non-state actors in a climate of near-total impunity”.

Amnesty interviewed 43 people for the report, including 32 refugees and migrants, who have all been arrested at least once in Libya. Many have spent time behind bars at detention facilities without judicial rulings.

All 32 were kidnapped for ransom and were tortured, raped or refused food until their families secured funds, according to Amnesty.

Another man said he was abducted and held for ransom several times during his two-year stay in Libya.

“One night at 3am, some criminals came in our home. They beat my wife. I fought back. They stabbed me in a leg and said: ‘If you move, we shoot her.’ They kidnapped us and took us to a hangar outside of Tripoli. They asked for $20,000 per person,” he said.

“There were 16 or 17 people in the hangar – from Somalia, Eritrea, Ethiopia. We stayed about 15 days … They beat people. When you arrive, they put you naked, beat the men and rape the women. After two weeks, I took a chance and ran away.”

Amnesty said the EU – which on Wednesday announced a long-awaited proposal for settling refugees and sending rejected asylum seekers home from the bloc – did not pressure the UN-brokered GNA to respect the rights of refugees and migrants.

“Despite regular promises by the Libyan authorities to take action against such crimes, most remain unsolved and unpunished,” said Markus Beeko, the group’s secretary general in Germany.

DISCLAIMER: The Views, Comments, Opinions, Contributions and Statements made by Readers and Contributors on this platform do not necessarily represent the views or policy of Multimedia Group Limited.
Tags:
Amnesty International
European Union
Germany
Libya