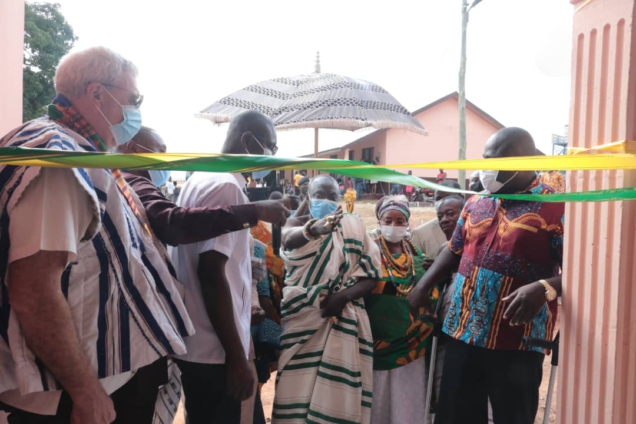 Despite attempts by previous and current governments at improving the quality of education among pupils and students at the Basic and Junior High School (JHS) levels, there are still some deficiencies.

In some cases, there are decent school facilities without tables and chairs or desks for pupils to sit on, while other schools have no teachers to man the facilities.

These situations are mostly prevalent in the rural areas where teachers usually do not want to accept postings.

The case of Apesokubi D/A Junior High School in the Biakoye district of the Oti region is no different as the school now has a decent infrastructure for teaching and learning but only three (3) teachers to handle eight (8) subjects.

The school in 2014 almost collapsed according to the headmaster, George Osei. He explained that with only 20 students in the school from form one to form three, most of the teachers threatened to leave.

However, the situation in the school has improved greatly as Africa Centre for Education and Community Development has stepped in to rehabilitate two three-unit classroom blocks,

The facilities have been fitted with ceiling fans and furnished.

Also, the Centre has provided a water closet toilet facility and additional one hundred pieces of desks for supplementary use. The school has also been gifted a thirty seater ICT Lab for the study of technology related subjects and courses.

However, in the midst of the seeming abundance, there is a major deficiency – the inadequacy of teachers to teach eight (8) subjects currently being run by the school for Junior High students.

The school according to the headmaster has only two permanent staff and a national service personnel whose service tenure comes to an end in August.

This means there would be inadequate teachers to prepare the final year JHS students.

The paramount chief for Apesokubi Traditional Area, Nana Okogyeaman Asiedu Koram II at a handing over ceremony asked the Ghana Education Service in the district to ensure adequate teachers are posted to the school to staff the facility.

According to him, the school environment has a major impact on teaching and learning.

“The environment and the facilities available affect teaching. If we have the edifice and we do not have the teachers to do the teaching, definitely, the outcome will not be good. We are praying that all those who matter help us get the required teachers.

“You go to some junior high schools and they have only three teachers teaching all the eight subjects and teaching more than forty (40) periods in a week which makes the workload too much,” he stressed.

The paramount chief also called on the students to make adequate use of the facility and stop surfing the internet.

He also called on parents to support the help being provided for their wards.

The headmaster, George Osei, also speaking at the handing over ceremony said the reengineered edifice has improved enrolment from twenty (20) to one hundred and six (106) students.

“I want to put on record that the student population now stands at one hundred and six” adding that the performance of the students at the Basic Education Certificate Examinations (BECE) for the past three years has been one hundred per cent.

He lauded the donors for the initiative and called on similar interest groups to help promote education in the area.

He also assured the efficient use of the facility to prolong its lifespan.

Mr. George Osei was elated that the ICT Lab has come at the right time to promote teaching and learning.

“The computer laboratory is going to enhance the teaching of the subject to enable students score better grades (in the subject).”

The District Director of Education for the Biakoye District, Roselyn Kafui Ofori promised that management will ensure that more teachers are posted to the school while admonishing students to take advantage of the improved facilities and study.

“I promise the full support of the District Education Directorate in the effective management and use of the facilities to benefit all students and to see to it that qualified ICT teachers are posted to man this facility for a smooth take off.”

The Executive Director for Africa Centre of Education and Community Development, Rev Fr. Akrofi Baafi said his interest is to see the younger generation do better than him and the many others who passed through the same school some twenty-eight years ago.

He also said his researches revealed a relation between improved academic environment and learning outcomes.

“…I conducted some research at the basic level and my findings showed that the school environment contributes 71.1 per cent of the total factors affecting academic performance.”

He said he would be playing a supervisory role to ensure the proper use of the facility.