Arteta ‘happy and privileged’ at Arsenal amid Barcelona links 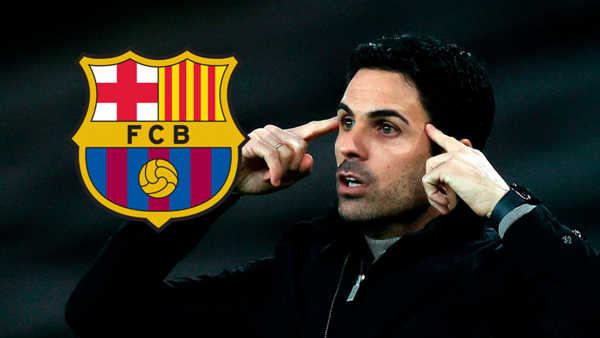 Mikel Arteta has played down reports linking him with Barcelona – saying he is “privileged and happy” at Arsenal.

The Gunners boss has been linked with a possible move to the Camp Nou this week, with Joan Laporta said to be eying Arteta as a possible replacement for Ronald Koeman, should he be voted into power during the upcoming Barcelona presidential elections.

But the Spaniard has played down the suggestions, insisting his only focus now is on continuing the work he is doing in north London.

When asked about his name being linked with the Barcelona job, Arteta said: “There is always going to be speculation when there are elections in Barcelona, it’s a huge team.

“Obviously I was raised there as a player and there is always going to be links. But I am fully focused on the job that I have to do here, which we have a lot to do, and I am really enjoying it.

“Today and tomorrow I am the manager of Arsenal football club and I am really enjoying it. And I want to do much better than what we have done so far.

“What I can tell you is I feel privileged to manage this football club and that I’m extremely happy.”

Where did the reports come from?

It was reported by RAC1 that Arteta was one of the options being considered by Joan Laporta as a possible replacement for Ronald Koeman.

Laporta is one of three candidates who are in the running to become Barcelona’s next president.

Goal has since learned, however, that the Gunners head coach has not been contacted by anyone associated with Barca over the role and he is not under consideration to succeed Koeman in the dugout.

Barca were due to appoint their next president in January, but it was ultimately pushed back to March 8 after a series of delays.

Laporta is running for the post alongside Victor Font and Toni Freixa, and all three men took part in the first electoral debate on Sunday before next week’s vote.

The Spaniard has two years left on the deal he signed when he arrived in December 2019 to replace Unai Emery.

His job title changed from head coach to manager in the summer following Arsenal’s FA Cup win, but the promotion did not come with a new deal.

Arteta says he has yet to start discussions over a possible extension and that his focus now is purely on finishing the season as strongly as possible.

He said: “We are in the middle of the season, we have a lot to play for and at the moment it’s not a priority.

“I think that it’s OK. I still have a contract here, I am happy here and I don’t think it’s something urgent.”

DISCLAIMER: The Views, Comments, Opinions, Contributions and Statements made by Readers and Contributors on this platform do not necessarily represent the views or policy of Multimedia Group Limited.
Tags:
Arsenal
Barcelona
Mikel Arteta