Barca boss, Ronald Koeman ‘fed up’ with defending himself 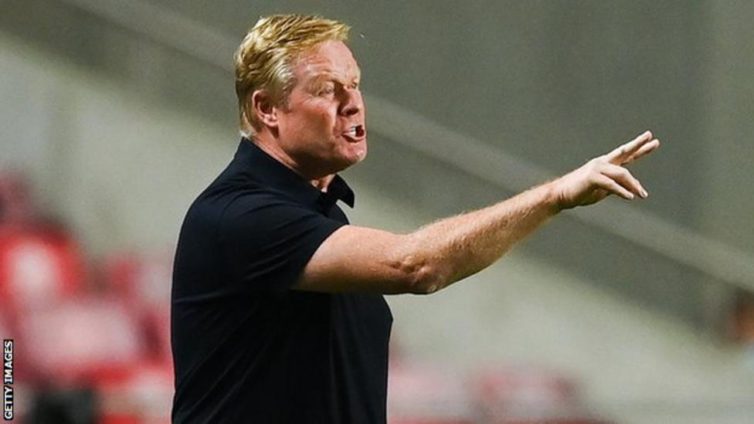 Under-pressure Barcelona manager Ronald Koeman says he is “fed up” with having to defend himself.

Reports say the Dutchman is on the brink of being sacked after Barca lost their first two Champions League games and are struggling in La Liga.

But before Saturday’s trip to reigning champions Atletico Madrid, Koeman remains in the dark about his Nou Camp future.

“Nobody has said anything to me,” he said on Friday.

“The president [Joan Laporta] was here but I haven’t seen him because we were preparing for tomorrow’s game.

“I am still here, but I have eyes and ears and a lot of things filter through.

“I am fed up of having to defend myself. It makes no sense. Today is not the time, but one day I would like to talk all about what I think of all this.”

However, the former Everton and Netherlands coach refused to answer a question about his relationship with Laporta, simply saying: “I am still here.”

Relations between the pair have been strained – bordering on toxic – since Laporta was elected as club president in March.

The Catalan side have been struggling with life after the departure of club legend Lionel Messi, losing 3-0 to Benfica in the Champions League in midweek and they are sixth in La Liga, five points behind leaders Real Madrid with a game in hand after three draws in six games.

On Thursday, Spanish football expert Guillem Balague told BBC Sport it is “just a matter of time” before Koeman is sacked.

“Timing is of the essence, not only to get rid of Koeman but also to get a plan in place,” said Balague.

But Koeman, Barcelona’s match-winner as a player in the 1992 European Cup final, wants to focus on Saturday’s game.

“I am not the most important,” he said. “A positive result is more important than one person. Everyone knows I am here out of love for the club. I came in a very complicated situation.”

When asked by one journalist what had been his best and worst moment in charge at the club since arriving just over a year ago, Koeman replied: “The best moment? When I signed to become Barca coach. The worst moment? When Messi left.”

DISCLAIMER: The Views, Comments, Opinions, Contributions and Statements made by Readers and Contributors on this platform do not necessarily represent the views or policy of Multimedia Group Limited.
Tags:
FC Barcelona
Lionel Messi
Ronald Koeman