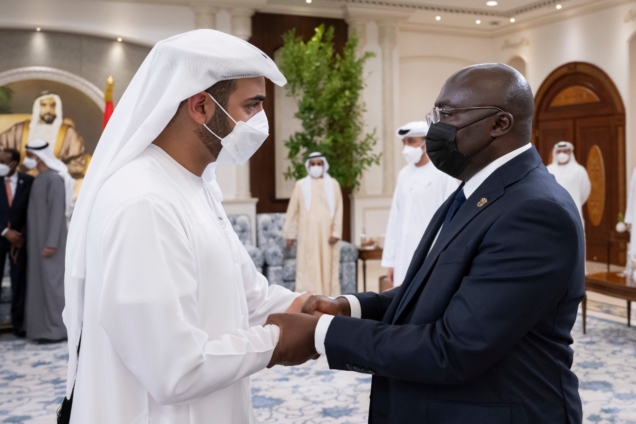 Vice President, Dr. Mahamudu Bawumia, on Friday, May 20, 2022, called on the new UAE leader, Sheikh Mohammed bin Zayed Al Nahyan in Abu Dhabi to commiserate with him and the people of UAE, following the death of Sheikh Khalifa bin Zayed Al Nahyan, President of the UAE.

The Vice President earlier in the week signed a book of condolence at the residence of the UAE Ambassador in Accra and also led a  government delegation to the United Arab Emirates to convey a special message on behalf of President Akufo-Addo and the people of Ghana.

At the meeting, Dr Bawumia expressed condolences to the new ruler, the Nahyan family and the people of UAE for the loss of Sheikh Khalifa bin Zayed, whom the Vice President spoke about in glowing terms, and described his death as a great loss.

Dr. Bawumia also used the occasion to congratulate Sheikh Mohammed on his assumption of office as the new President of the UAE.

Ghana and the UAE enjoy great relationship and the meeting also discussed strengthening ties and cooperation between the two countries.