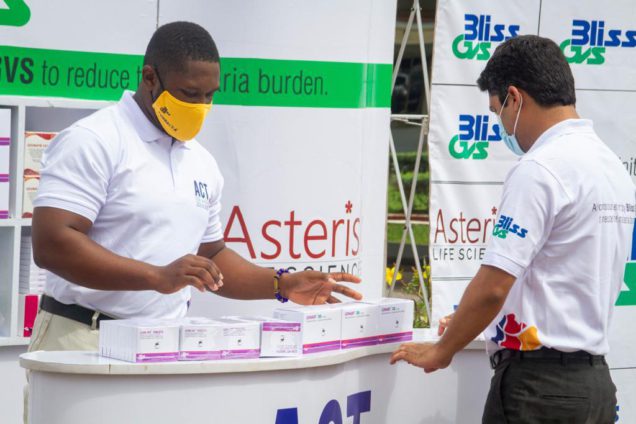 Bliss GVS Pharma, a global pharmaceutical company providing quality medicines, in their quest of making medicines easily accessible to the people of Ghana has continued its donation of antimalarial and other essential medicines in Accra, to help enhance their fight against the disease in the country.

The company has donated medicines of ¢150,000 to the 37 Military Hospital and the Police Hospital in Accra.

The Institutional Manager of Bliss GVS Pharma Ghana, Mr Joshua Affram, presented the medicines to the Commander of the 37 Military Hospital, Brigadier General Adja Obodai, while at the Police Hospital, they were received by the Chief Pharmacist, Assistant Commissioner of Police (ACP) Ellen Sam.

The commander of the 37 Military Hospital, Brigadier General Adja Obodai said, the hospital is appreciative of the efforts of Bliss GVS Pharma for donating medicines to the facility and has assured that the medicines will be given free of charge to the patients in need.

The Chief Pharmacist at the police hospital ACP Ellen Sam said that Malaria constitutes more than 20% of OPD cases. The donated antimalarial medicines especially LONART will be useful in the fight against malaria. He thanked Bliss GVS Pharma for their initiative.

Henry Safori from MOH, Ms Frederica from Ghana Health Services and Harry Okyere from PSGH were present for this program.

They appreciated the initiative of Bliss GVS pharma in eradicating malaria in Ghana through their campaign ‘Act for Africa-Malaria Free Continent.’

The medicines donation came on the back of similar supports extended to the Korle Bu Teaching and RIDGE hospital in April this year on World Malaria Day.

The Institutional Manager of Bliss GVS Pharma Ghana, Mr Joshua Affram, said the company aimed to help eradicate malaria in Ghana and Africa as a whole.

He explained that the support formed part of the company’s commitment to helping resource health facilities with antimalarial and other essentials to rid Ghana of the disease.

He bemoaned the deadly nature of malaria, called for increased efforts to help rid of the country, especially among children and women.

Africa for decades has been struggling to fight the battle of Malaria. Data shows that malaria cases and deaths in the country account for two per cent and three per cent of the global cases, making Ghana one of the 15 countries in the world with the highest malaria burdens.

For over two decades, BLISS GVS PHARMA has been leading many initiatives to help reduce this MALARIA burden, with its antimalarial product basket of LONART, GSUNATE, GVITHER and P-ALAXIN.

We at Bliss GVS Pharma, always believe that nothing is important than a healthy life. As part of our corporate social responsibility, we are working to achieve our goal of improving lives through easy access to medicines. The company will make similar donations to other health facilities in the country, he added.