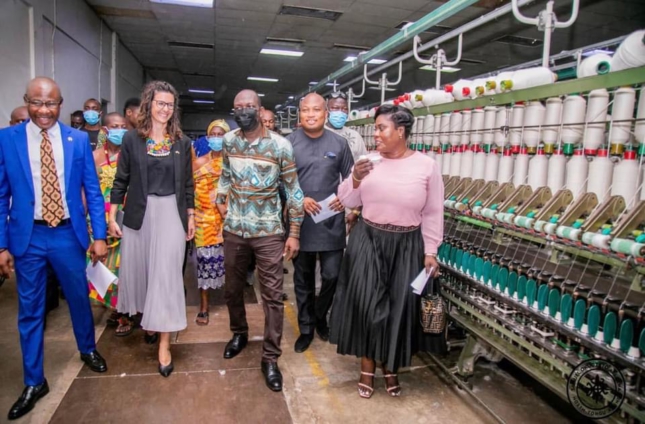 The British High Commission has begun a move to revamp the Volta Star Textiles Limited in the North Tongu District of the Volta Region.

The initiative which falls under the Britain government’s Job and Economic Transformation Programme seeks to identify investors to aid in retooling the textile factory and produce to meet market demands.

The Volta Star Textiles Company established in the 1960s used to employ about 3000 workers. It was designed to produce about 20 million yards of yarn annually.

However, the facility currently only produces 6 million yards annually due to obsolete machinery at the facility, among other factors.

Speaking at a mini durbar, the Mankralo of the Dorfor Traditional Area, Togbe Manklalo Agbohla VI, lamented the state of the factory which used to be the nerve centre of the local economy.

He detailed that the factory supported livelihoods of most residents in about 5 districts in the Volta and Eastern Regions.

The British High Commissioner, Harriet Thompson after a feasibility study to ascertain the state of the factory, promised to liaise and get investors to revamp it.

She said that the British government is supporting various sectors of the Ghanaian economy including garment and textiles under its Job and Economic Transformation Programme.

The Programme hopes to create an enabling environment and identify investors to drive the growth of the various industries in order to create jobs and wealth in Ghana.

The North Tongu Member of Parliament, Mr. Okudzeto Ablakwa, believes the initiative to retool the factory will fit into the agenda of the African Continental Free Trade Area.

This he said would make available jobs for the youth and promote trade within the continent. He assured of his support towards revamping the Volta Star Textile Company.

The British High Commissioner, Harriet Thompson, was honoured and given the title Mama Dunenyo I of the Dorfor Traditional Area.