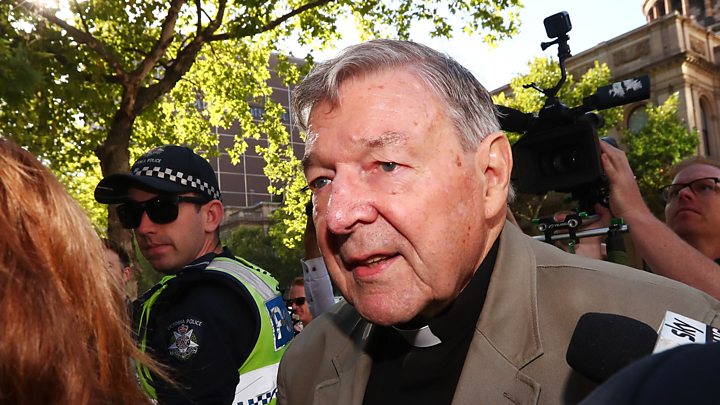 Cardinal George Pell has been freed from jail after Australia’s highest court overturned his conviction for child sexual abuse.

The former Vatican treasurer, 78, was the most senior Catholic figure ever jailed for such crimes.

But the High Court of Australia quashed that verdict on Tuesday, bringing an immediate end to Cardinal Pell’s six-year jail sentence.

The Australian cleric had maintained his innocence since he was charged by police in June 2017.

His case rocked the Catholic Church, where he had been one of the Pope’s most senior advisers.

A full bench of seven judges ruled unanimously in Cardinal Pell’s favour, finding the jury had not properly considered all the evidence presented at the trial.

It was the cardinal’s final legal challenge, after his conviction was upheld by a lower court last year.

“I have consistently maintained my innocence while suffering from a serious injustice,” Cardinal Pell said in a statement after the decision. He had served more than 400 days of his sentence and cannot be retried on the charges.

He was released from Victoria’s Barwon Prison shortly after midday local time (02:00 GMT) and driven to a Carmelite Monastery in Melbourne, local media said.

Why was Pell jailed?

In December 2018, a jury found him guilty of sexually abusing two 13-year-old choir boys in private rooms of St Patrick’s Cathedral in the mid-90s – when the cleric was Archbishop of Melbourne.

The convictions included one count of sexual penetration and four counts of committing indecent acts.

The trial heard testimony from a man alleged to be the sole surviving victim. Dozens of other witnesses provided alibis and other evidence.

Cardinal Pell appealed against the verdict in Victoria’s Court of Appeal last year, but three judges upheld the decision by a 2-1 majority.

Why did his appeal succeed this time?

The cardinal argued that the jury, and previous appeal judges, had relied too heavily on the “compelling” evidence of the alleged victim.

The cleric’s lawyers didn’t seek to discredit that testimony, but rather argued that the jury had not properly considered other evidence.

The High Court agreed, ruling that other testimonies had introduced “a reasonable possibility that the offending had not taken place”.

“The jury, acting rationally on the whole of the evidence, ought to have entertained a doubt as to the applicant’s guilt,” said the court in its summary judgement.

There had been scrums outside court on the biggest days of George Pell’s trial, from his first appearance to the sentencing. Police had to keep back camera crews and fend off angry campaigners.

Once inside, the courtrooms were always packed to the rafters.

But on perhaps the biggest day of all – barely anybody was there to witness it.

Covid-19 restrictions meant just three people were allowed into the public gallery of the courtroom in Brisbane, the home town of the chief justice where the High Court sat.

While it was quiet inside, the decision to quash Cardinal Pell’s conviction brought jeers, tears and some cheers across Australia as this massive case drew to a close.

What’s the reaction been?

Cardinal Pell said an injustice had been “remedied”, and said he held “no ill will to my accuser”.

“However my trial was not a referendum on the Catholic Church; nor a referendum on how Church authorities in Australia dealt with the crime of paedophilia in the Church.”

The father of the deceased choir boy was in shock at the decision, his lawyer said.

“He says he no longer has faith in our country’s criminal justice system,” said Lisa Flynn.

Prime Minister Scott Morrison said: “The High Court has made its decision and that must be respected.”

He added his “thoughts [were] always with” survivors of abuse, for whom “mere discussion of these topics brings back great hurt”.

Victoria Police said it remained “committed to investigating sexual assault offences and providing justice for victims no matter how many years have passed”.

What now for Pell and the Church?

The Vatican will be relieved at the quashing of Cardinal Pell’s guilty verdict.

On Tuesday, just hours after the court upheld the appeal, Pope Francis offered his morning mass for those suffering from unjust sentences, although he did not mention the cardinal by name.

He had refrained from stripping George Pell of his clerical titles while all legal avenues had not been exhausted.

But it remains unclear whether Cardinal Pell will return to his post as Vatican treasurer.

Before he went to trial he had started to institute reforms. He opened up the Vatican’s sprawling finances to a degree of scrutiny never seen before and this was met with resistance from vested interests within the Church.