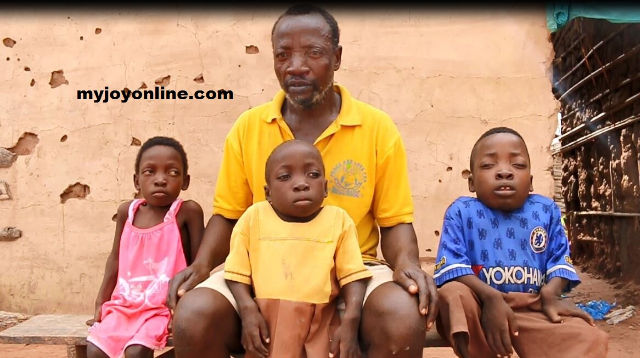 The abnormal condition of three children with growth disorder in Asante-Akyem North District of the Ashanti Region has left their parents devastated.

Doctors at the Komfo Anokye Teaching Hospital say few cases of the rare condition of the children are reported at the facility.

Father of the stunted children, aged between six and fifteen, says he is over-burdened by the task of giving them special care, amid resource constraints.

Fifty-seven-year-old Allan John Kramo and his family relocated to Nso Nyame Ye after herdsmen attacked and burnt down their hamlet at Abrewa Nko about a year ago.

“Ganiu Mohammed is 15 years, Hajia Tenee is 12 years and Rukaiya Mohammed is 6,” Mr. Kramo opens up about his family.

Life has since been difficult for the Kramos, though the couple is blessed with four children from a 23-year old marriage.

For Mr. Kramo, he cannot comprehend why three of his five children are deformed.

“I wonder how I gave birth to physically challenged children. I cannot tell if it is a matter of destiny.”

According to him, the children who were born normal, developed strange characters as they grew.

Ganiu Mohammed, who is the eldest can hardly walk for 10 minutes because of weak limbs.

He aspires to become a journalist, though his condition has confined him to Class Five for four years.

“I want to further my education, get a good job and take care of my parents. It is my dream to become a journalist. I want to work on radio and television,” he said in Twi.

Their inability to do anything to support their poor dad especially on the farm is a bother to Ganiu.

“My father is poor but there is little his children can do to help him. We can’t because we are physically challenged.”

Unlike other kids in his class, Ganiu does not look his age, a situation he regrets.

“It saddens my heart when I compare myself with my mates. They are different; I am physically challenged, they are strong.”

This headache is not only limited to Ganiu but his father, Mr Kramo, a peasant farmer.

“They cannot walk from the house to school. It’s difficult and makes their care burdensome,” worried Mr Kramo murmured.

Teachers at Nso Nyameye D/A Basic School lament over the inability of Ganiu’s parents to provide his educational needs.

The Department of Social Welfare and Community Development says it will need medical report on the children to determine what kind of support to give them.

Asante Akyem North District Director, Thomas Owusu Gyamfi, says resources at the directorate’s disposal are not enough to meet the needs of Ganiu and his sisters.

Doctors at Komfo Anokye have examined the children but say they require a series of other tests to ascertain the cause and treatment.

Dr. Emmanuel Ameyaw, Specialist Paediatric endocrinologist is a member of the team of doctors who examined the children.

“They have skeletal deformities. You can see that the bony framework -there is something wrong with it. You can see their chest protruding and then there is a curvature along the spine. We’ve seen quite a few cases of these. They are not many. I think this is Mucopolysaccharidosis – it is an inborn error of metabolism.”