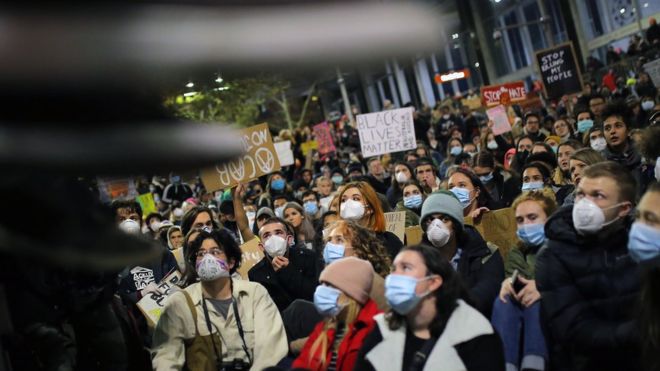 An Australian court has banned a Black Lives Matter protest that was planned this weekend in Sydney, saying it posed a coronavirus health risk.

New South Wales (NSW) Police had sought a court order to halt it.

Thousands were expected to attend the rally in solidarity with US protests over the killing of George Floyd and to express anger over indigenous deaths in Australian custody.

Organisers say they are determined to go ahead with the protest.

Since the killing of African-American man George Floyd in Minneapolis, Australians have protested against their own country’s disproportionate number of black deaths in custody.

Australia has recorded about 7,200 cases of the coronavirus and rapidly flattened its curve since April. There have been no community transmissions in NSW for more than a week.

“Everybody has given up a lot in order to defeat this disease,” Justice Desmond Fagan said, ruling that health concerns outweighed the right to protest on this occasion.

“It’s not a time to throw out our caution,” he added.

However, Latona Dungay, whose son David died in prison in 2015, told AFP news agency: “We are going to march if they like it or not, because this is our land and nothing is going to stop any of us.”

“Let’s find a better way and another way to express these sentiments, rather than putting your own health at risk, the health of others at risk,” he said.

Demonstrations have already been held in cities including Sydney, Brisbane, Perth and Canberra.

Police in Melbourne have urged people not to attend a planned protest there, pleading with organisers to cancel the event and threatening to issue fines. However, in Brisbane and Adelaide, protests have received police approval.

At least 432 Aboriginal and Torres Strait Islander Australians have died in custody since 1991, according to data from the Guardian.

Why was the Sydney protest challenged?

About 10,000 people expressed interest in attending the rally on Saturday in the city centre.

Organisers told attendees to wear face masks and personal protective equipment (PPE), and to try to maintain distance from others.

State Premier Gladys Berijiklian said the protest had been approved initially, but the rise in probable attendees had raised concerns about social distancing.

Both police and the government had asked the Supreme Court of NSW to have the protest “deemed illegal”, she told reporters.

The decision has been criticised by some as an attempt to stifle free speech.

“This is not what’s needed. This needs co-operation and understanding, not force,” said politician David Shoebridge of the Greens party.

In advance of the court ruling, Greens Senator Mehreen Faruqi commented: “There’s no doubt Covid-19 is dangerous, but so is systemic racism. First Nations people have asked for our support. See you at the rally.”

The state’s police force was criticised earlier this week over the controversial arrest of an Aboriginal teenager in Sydney. Assistant Commissioner Mick Willing said he hoped the incident would not spark the level of violent demonstrations seen in the US.

Australia has been slowly lifting its coronavirus lockdown restrictions. NSW has allowed many businesses to reopen, outdoor gatherings of 50 people to go ahead, and encouraged local travel.

The state recorded four new cases on Friday – all from returned travellers in quarantine.