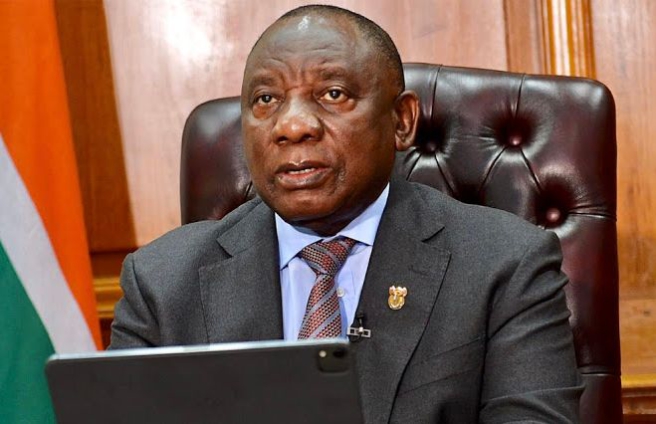 Leaders of South Africa’s governing party are meeting to discuss President Cyril Ramaphosa’s future amid a corruption scandal that has led to calls for him to resign.

A panel of legal experts said last week that Mr Ramaphosa may have broken the law by allegedly covering up the theft of a large sum of cash at his farm.

The president’s spokesman described the report as “flawed”.

Speaking on Sunday, Mr Ramaphosa said his fate was in his party’s hands.

The meeting of the African National Congress’ executive committee – its top decision-making body – comes a day after a smaller group of leaders met to discuss the issue, but failed to reach a conclusion.

Mr Ramaphosa’s legal team is also expected to lodge papers with the country’s Constitutional Court on Monday to undertake a legal review of the report by the panel that was appointed by the speaker of parliament.

The scandal erupted in June, when a former South African spy boss, Arthur Fraser, filed a complaint with police accusing the president of hiding a theft of $4m (£3.25m) in cash from his Phala Phala game farm in 2020.

Mr Ramaphosa admitted that some money, which had been hidden in a sofa, had been stolen, but said it was $580,000 not $4m.

The president said the $580,000 had come from the sale of buffalo, but the panel, headed by a former chief justice, said it had “substantial doubt” about whether a sale took place.

The panel’s findings have been handed to parliament, which is set to examine them and decide whether or not to launch impeachment proceedings against the president.

The president is also under pressure from the opposition, as well as rivals within the ANC, to resign.

But the ANC leaders could instruct its MPs to back Mr Ramaphosa, when the issue is due to be discussed by parliament on Tuesday.

The scandal is especially damaging for the president because he came to power vowing to clear up the corruption which had dogged the country under his predecessor, Jacob Zuma.

The ANC remains deeply divided between supporters of Mr Zuma and those who back Mr Ramaphosa.

DISCLAIMER: The Views, Comments, Opinions, Contributions and Statements made by Readers and Contributors on this platform do not necessarily represent the views or policy of Multimedia Group Limited.
Tags:
ANC leader
President Cyril Ramaphosa
South Africa