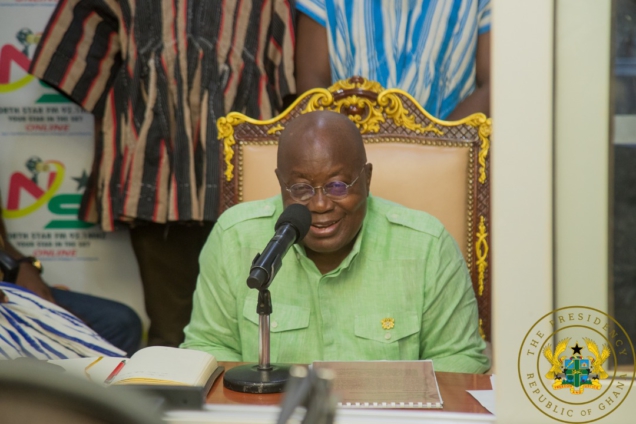 President Nana Akufo-Addo is confident that the economy will bounce back strongly from the ravages of the Covid-19 pandemic, which has been exacerbated by the effects of the Russian invasion of Ukraine.

Speaking on the recent economic challenges confronting the nation on Monday, he said when he took office in January 2017, he inherited an economy under an IMF Programme.

He told North Star Radio that his government was able to exit successfully; in 2019, the IMF programme started by the erstwhile Mahama government implemented flagship programmes like the Free SHS policy and 1-District-1-Factory initiatives and grew the economy at an annual average growth rate of 7% from 2017 to 2020.

“Just as we were able to go through this COVID situation, I am confident (that we will go through these current difficulties).

“Let me repeat it that this government, based on our implemented policies, will find a way to bring our economy back to a better place,” he assured.

The President noted that since 2020, Government has taken some very significant, proactive measures to minimize the impacts of the Covid-19 pandemic.

“We have one of the lowest mortality rates of any country in the world, not just in Africa, but also in the world, and one of the lowest infection rates largely because of the decisiveness of which the government acted to make sure that this pandemic was, as much as possible, prevented from having any really significant impacts on the people,” President Akufo-Addo said.

He added, “Towards the end of last year, the last quarter of last year, our GDP growth picked up again to over 6%, I think that you are aware of that.

“This is before the war in Europe, because the recovery had begun again, and the confidence in the economy and its management was resurfacing.”

Unfortunately, the President bemoaned, the decision to invade Ukraine taken by the Russian President has had an impact on “commodity prices, food prices across the world.

“Freight rates went up astronomical, virtually all these various indices which are so important in the management of the economy, went through the ceiling.”

Touching on why the Ghanaian situation is not in isolation from the rest of the world, President Akufo-Addo said, “it is also important for us to recognize that we’re not the only economy in the world that is having these difficulties.

“Virtually all the economies, great and small, you read the data about what’s going on in America or Britain, the European Union and in other African countries, you see that we’re all in the same boat.”

However, he pointed out, “I am not looking for excuses, I’ve never believed in excuses, as a way of running a country, you have to play with the cards with which you are dealt.

“But the cards that have been dealt with, in this our second term, are these exogenous factors, external factors, that have had such a big impact on us, and we are determined to work our way through it.”

President Akufo-Addo assured that “we are determined to work our way through it. We did it when I first came into office, and strongly believe that we can do it again because the policies are sound”.

He reiterated, “we are about putting Ghana in a sound place. For the time being, there will be a lot of up and down, people talking, yes the difficulties are there, I’m the last to want to minimise the difficulties, they are there, they are affecting the lives of ordinary people in a very negative way.

President Akufo-Addo is on a two-day working tour in the Northern Region of Ghana, following visits to the Upper East and North East Regions