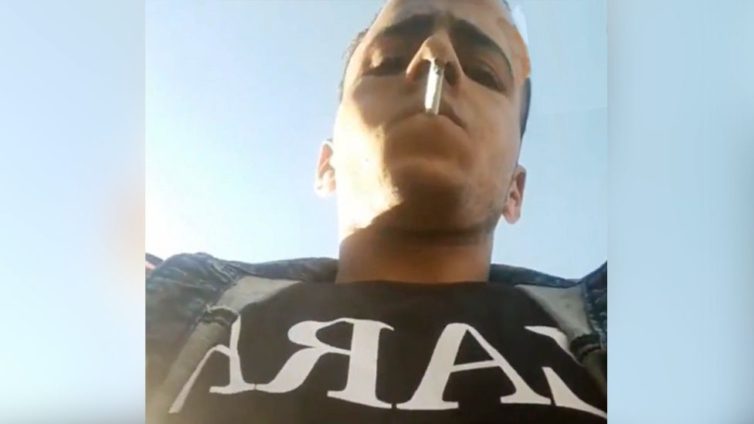 The thief as he made his escape from the scene

Egyptian social media users have hailed a man who inadvertently broadcast his face to thousands of people while stealing a journalist’s phone as “the coolest thief in Egypt”.

Mahmoud Ragheb, a reporter for the news site Youm7, was livestreaming a report on social media when the thief drove by on a motorbike and seized his phone.

The broadcast then revealed the young thief’s face as he sped away from the scene casually smoking a cigarette.

Police have since announced his arrest.

According to Youm7, the incident happened on a bridge in Egypt’s fourth-largest city, Shubra Al-Khaimah, where Mr Ragheb was reporting on the after-effects of a 6.2-magnitude earthquake that rattled parts of Egypt.

Mr Ragheb was filming the bridge when his phone was grabbed roughly from his hands by the unnamed thief. Once the camera had stopped shaking it revealed the face of a young man smoking a cigarette and checking slightly nervously behind him to see if anyone was in pursuit.

However, there was little sympathy for the intrepid reporter’s plight, with most social media users focussing on the thief’s relaxed demeanour as he snatched the phone and continued to pull on his cigarette as he made his escape.

One user commented that they had “died from laughter,” while another questioned why the man had bothered looking behind him while “the whole world is watching you”.

More than 20,000 people were watching the livestream when the theft took place and according to figures on Facebook, the video has since racked up more than 6.2 million views and 45,000 comments in a little over 24 hours.

Sadly for the thief, broadcasting his face in this way made it relatively easy for authorities to track him down. The Ministry of the Interior announced last night that it has detained him.

In a statement, the ministry said that the man is “jobless” and that he has since sold the stolen mobile to a trader.

DISCLAIMER: The Views, Comments, Opinions, Contributions and Statements made by Readers and Contributors on this platform do not necessarily represent the views or policy of Multimedia Group Limited.
Tags:
Egypt
Robbery