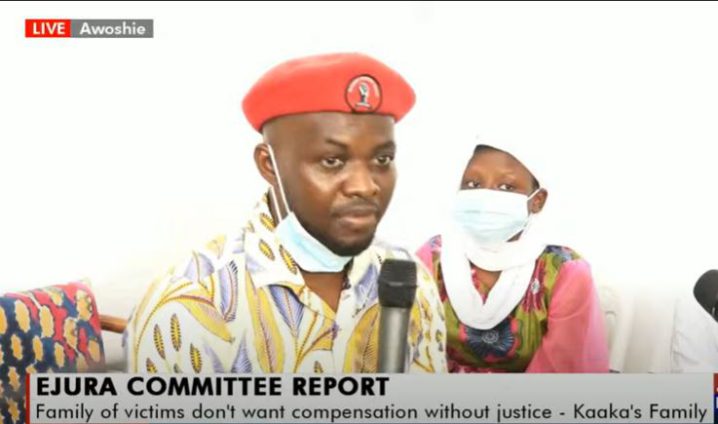 The leader of the Economic Fighters League, Hardy Yakubu has described as bogus and fraudulent the reports of the three member committee tasked to probe into the Ejura disturbance in the Ashanti Region.

Speaking at the press briefing organized by the family of Ibrahim Muhammed, popularly known as Kaaka on Monday, October 14, 2021 at Awoshie, Mr Yakubu said the Committees findings are senseless and out of context.

“A lot of the findings are completely out of line and clearly I mean it just doesn’t make sense. Soldiers have gone on the ground and you yourself have stated that immediately they got down from the vehicle, they started shooting at harmless civilians, leading to death of young people and permanent mimic of others and what you can recommend is that the military should do internal investigation and give appropriate sanctions. What is the meaning of that? “ he queried.

Mr Yakubu further stated that the reports from the Committee should be disposed, adding that “it is clear that none of these investigations ever brings any sort of justice.”

He said that the Committee ought to examine the work they’ve done so far.

“They must sit down and do introspection and ask themselves if they were in the position of the families that have been affected would they have been happy with these report,” he said.

He also questioned the findings the Committee presented on Kaaka’s death. According to him, when the wife of the deceased, Sahada Hudu approached the Committee, she questioned whether the committee was set up to investigate the murder of the husband of which a negative response was given.

“So in what capacity, by what mandate, by what stretch of the imagination were they able to come out with a finding that Kaaka was not killed by reason of his activism without even verifying any of the videos that Kaaka himself made about threats on his life on his Facebook page; without even getting any sort of hard evidence on the ground including the murder weapons at the scene of the murder,” he stressed.

DISCLAIMER: The Views, Comments, Opinions, Contributions and Statements made by Readers and Contributors on this platform do not necessarily represent the views or policy of Multimedia Group Limited.
Tags:
Ejura Committee Report
Hardy Yakubu
Kaaka