Election petition: As a matter of politics, I will discourage a review – Barker-Vormawor 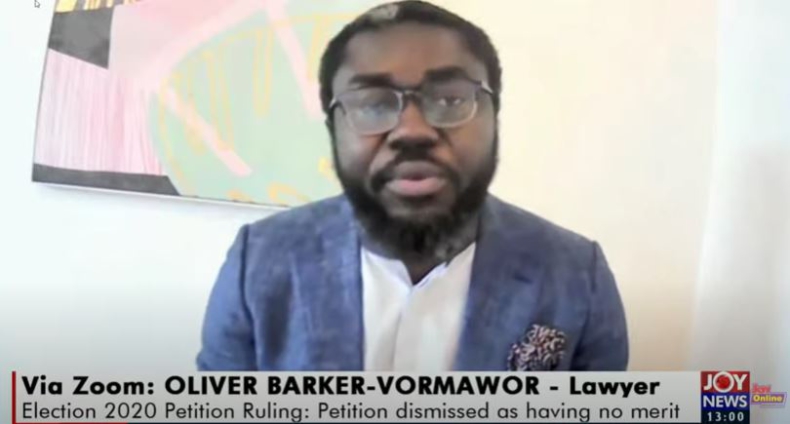 Chief Technical Advisor, University of Ghana School of Law’s Democratic Vigilance Project, says the petitioner in the just-ended 2020 election petition, John Mahama should not seek a review of the verdict of the Supreme Court.

Oliver Barker-Vormawor said seeking a review of the apex court’s verdict could undermine to some extent the faith Ghanaians have in the judicial process as an option for parties to resolve election-related disputes.

His comment comes after a seven-member panel of Supreme Court Judges in a unanimous decision dismissed the election petition filed by the 2020 NDC presidential candidate, John Mahama.

This, according to the apex court, is because the case before it had no merit.

But reacting to it, Mr. Barker-Vormawor said, “I think as a matter of politics I’ll discourage the search of a review in this particular matter. I think it is important that political parties also ensure that there is faith in this process, and I worry that going for a review might undermine to some extent the faith.

“It doesn’t mean that the right of a review does not exist, it is a matter of politics. If it was left with the lawyers alone I think that every lawyer would want another chance to try to change the court’s mind, and if the lawyers were made to answer that question, they would encourage a review.

“But I think the politicians need to take the seat in this and say that there should be no review and I think that will be the right call in my personal opinion.”

He said though the petitioner may disagree with the Court’s judgement, they may struggle “to say the judgement itself is not whole, holistically well-reasoned.”

The position of the petitioner on the court’s verdict is yet to be made known.

According to lawyers of the petitioner, John Mahama will address the nation at 5 pm this evening from his Cantonment residence.

DISCLAIMER: The Views, Comments, Opinions, Contributions and Statements made by Readers and Contributors on this platform do not necessarily represent the views or policy of Multimedia Group Limited.
Tags:
2020 election petition
John Mahama
Oliver Barker-Vormawor
Supreme Court