Electrician whose wrist was cut off by 3 men in Aboabo seeks justice - MyJoyOnline.com 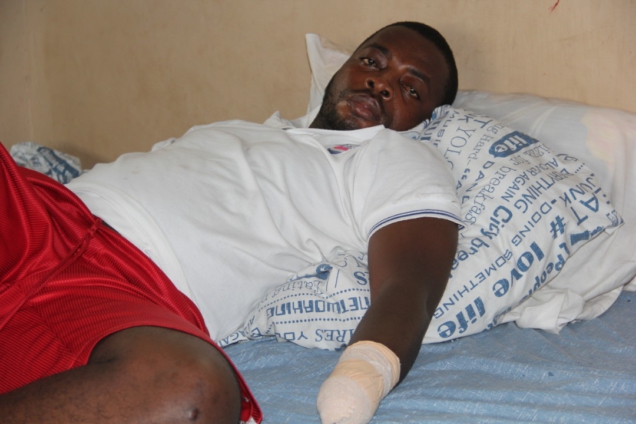 Every Ghanaian regardless of age or occupation has the right under the law to seek justice.

Article 12 of the 1992 Constitution guarantees every citizen full respect for fundamental human rights and freedoms as enshrined in the supreme law of the land.

Section 14(1) of the Constitution protects the personal freedom of the individual. However, this right means nothing if you cannot exercise when it matters most.

A reason a 32-year-old man whose left wrist was chopped off by three young men in Aboabo, a suburb of Kumasi in the Ashanti region seeks justice in court.

A squabble over the siting of a hencoop at Aboabo in Kumasi has left a 32-year-old electrical technician with severed wrist.

Mohammed Murtala suffered the ordeal when he attempted to help settle a dispute between two families and is currently seeking justice before a district court in Kumasi.

Mohammed Murtala’s efforts to initially seek justice after being attacked by the three criminals was most likely to slip the justice system.

This was because the Mother of one of the perpetrator who allegedly incited them to attack the victim was released on bail, leaving the case hanging.

The incident occurred on September 14, 2020, around 7:30 pm, when Murtala’s co-worker went to repair a neighbour’s electrical fault. Murtala said he overheard a loud sound in the mansion.

“I went only to see three boys wielding machetes and asked what the problem was that would have pushed them home with machetes.”

Murtala said the young men stormed the house to attack and kill a friend his co-worker went to fix his electrical problem. The boys claimed the man insulted their mom.

The 32-year-old said “I begged them to rescind their decision as I told the man not to go out of his room. I just kept begging until we got out of the house.”

Unfortunately, one of the boys urged the other, to strike Murtala with the machete. As soon as Murtala was able to turn his back, the boy tore off his left wrist.

“I saw the boy raising the machete high to strike. Then I used my hand to block it, and then I got another hit that cut my handoff in a neighboring gutter, he lifted the machete for the third time, and he hit me in the mouth.”

Murtala pretended that he had died and they began to back down while warning the spectators not to approach them.

“I then fell into the gutter on my own and picked out the wrist and tried to join it to my hand.”

The primary target of the attack, Zakaria Abdul-Rahman rushed to defend Murtala but also suffered a machete wound on his head.

“We were looking from the window until they left the house and the electrician pointed out that my patience had paid off because they had left, just for us to hear a scream.

“They cut off my hand, so I rushed out angry, and I saw one of them, I pursued him, but I fell and Huzaif hit me on the head with a machete”, Zakari recounted.

Thus, Murtala caught the attack on a dark day.

He was rushed to Manhyia Government Hospital and then to Komfo Anokye Teaching Hospital, but it was excessively late for Muntala’s wrist to immediately receive medical attention.

“When we arrived at the hospital, they placed the severed wrist in a plastic bag, poured crushed ice on it, and referred us to KATH. At KATH, we were told that the specialist who could care for me had gone home. But whoever could stitch up my mouth was there.”

Murtala’s mouth was stitched together, the injured hand was well dressed, and he was advised to wait until the following day for an adequate assessment of the damage.

The next day, a doctor at Komfo Anokye Teaching Hospital informed Murtala of 60,000 ghc for the cost of repairing the severed wrist.

Murtala and her family were unable to afford such a sum. As a result, one Dr. Rauf was contacted and, after further assessment, noted that the severed wrist can be repaired but will be inanimate and may even cause bodily damage.

“He recommended buying artificial wrist. I had a lot of sadness..”

The next day, Murtala was taken to the theatre for further medical treatment.

The eldest brother was begged to bury the severed wrist because there was no purpose in keeping it.

Murtala’s eyes were filled with tears. He could not understand why life could deal with him horribly in just one day.

Everything has been rewritten for Murtala – and he must now live on one wrist.

Cause of the attack

Zakari Abdul Rahman was the prime target for the attack.

He asked one of the perpetrator’s ten-year-old brothers to move an empty poultry cage in front of the house.

The ten-year-old followed suit, but after a week, Zakari said the structure has not yet been relocated.

“One week and the cage was still there. I asked why he refused, but the boy said the father had killed all the birds, and there was just one rabbit left. So I asked them one more time to give the wooden cage to a nearby porridge seller and keep the place tidy.”

When they cleared the place, Zakari said he saw cattle ropes with the ten-year-old, so he asked where he got them from.

“He said they were for his master, and they usually tied up cattle. I took them away and decided to give them to the father because it was not good for his age to have such ropes in his possession.”

Zakari said the boy demanded the rope “so I hit him on the butt,” he stated.

Zakari thought things were going well until the boy’s mother came to express her dissatisfaction with what had happened to the son.

The journalist’s sources said that the mother was unhappy and that her children were targeted for any wrongdoing at home.

The mother, Laila Issah made a call in her language and told her husband about the incident.

The reporter gathered that the husband replied that Zakari would not have spanked the boy if he had done nothing wrong.

According to Zakari “She retorted that the day he (husband) learns that his children died, that is when he will believe.”

She made another call. This time to one of her sons only known to the residents as Huzaif.

Within 10 minutes, Huzaif arrived at the house, entered his mother’s room, came out to warn Zakari accusing him of targeting his mom and the siblings, and suddenly left.

In the next 30 minutes, Zakari said “he returned home with two of his friends, insulting me and threatening to butcher me like a sheep if I dare get out of my room. Whenever I decided to go out, the electrician would advise me.”

Then Murtala came to the house, having heard the loud noise. “I did not offend any of them, but I supposed they were furious with the instruction I gave to those in the room not to go out. I had convinced them to stop and they were leaving up until one of them instructed the other to strike me with the machete. If I didn’t turn around quickly, and the strike hit me on the head, I might not have been speaking to you today; I might have been in my grave right now.”

Murtala’s crime was the instruction to the young boys to leave the house. He convinced them to leave until one of them instructed the other to strike him with the machete.

Apparently, the perpetrator’s mother allegedly gave the machete for the attack. Because Murtala said “it was an eid machete and she gave it to him to embark on the attack.

“When the incident began the landlady went to the mother to inform her about it and further advised her to go to the scene to stop her son before any blood is spilled.”

Murtala’s electrical workshop is just a meter away from where the incident occurred and after the attack, it has been closed because he can’t work like before.

32-year old is afraid of losing his clients.

“I feel pains in my body; I think I need support from the public because I am now handicapped. Before the attack, I could wire a complete house, repair ceiling fans, motorbike’s horsepower, and home appliances such as stabilizers, blenders among others at the shop but all cannot be possible now with one wrist”

Police on the matter

Police sources say the mother (Laila Issah) of the culprit was rearrested and put before a district court in Kumasi.

On their First appearance in court October 9, 2020, she was admitted to bail, and a bench warrant was issued for the arrest of the son who is currently on the run.

The last appearance in court was on December 1st and the case has been adjourned to December 21st.