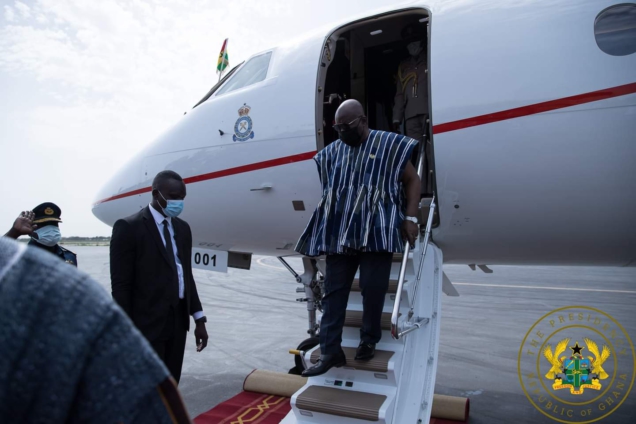 In 2008 when President Kufuor announced his government’s intention to build the Jubilee House, I opposed it not because a presidential mansion was not necessary but because among the hierarchy of needs of Ghanaians, it was not, in my opinion, a priority.  Yes, the poor will always be with us, but I disagree that we must feed them gravels while the rich eat chocolates, grapes and apples.

Those grounds for my plea to Kufuor in 2008 have not changed as Akufo Addo gets set to acquire a new presidential jet. Not that the President of Ghana does not deserve it: it is that the timing is wrong; that there are other means to travel overseas without a Presidential Jet but the poor in Ghana have no other means of getting roads and potable water if Presidents don’t prioritize them.

Imagine the blessing from 31.8 million hearts if Ghanaians wake up tomorrow morning to the following speech from the Jubilee House:

“In consideration of the grinding poverty which greets me wherever I go in this country, particularly villages where cattle share drinking water with humans – even as the cattle urinate into the water body; actuated by a strong, almost messianic, desire to ease the burden of Ghanaian workers, industrialists and other entrepreneurs whose bodies have bent, almost double, under the weight of taxes, I, Nana Addo Dankwa Akufo Addo, have decided that a new Presidential Jet is no longer my priority.

“I, the President you voted for, twice, to lead this country to the type of economic prosperity that will be felt in the ordinary person’s pocket, hereby swear to this as a gesture of reciprocity to the people whose sweat and drudgery provide my present monthly salary in excess of ¢29,000, a fleet of limousines plus two post-retirement mansions, 4×4 and saloon fully airconditioned vehicles and full security detail in a country where the minimum wage is ¢12.56. I do this not because I don’t need a plane but because the people need the basics of life more.”

Imagine how this gesture will couple with Free SHS and 1D1F to make this President the most fondly remembered after Kwame Nkrumah! Within his lifetime, the people of Ghana will raise a memorial to his honour forever.

But let’s face it. The above aside, the question to which I have been seeking an answer is: Why should Ghana buy a new jet for our President? Is it the argument that the existing jet has become too dangerous to fly?

Surely that cannot be since, as is now known, our Falcon 900 EX, purchased at a cost of $37 million, is used by other people, besides our President, the most recent being the Liberian President. If the plane is air-worthy enough to fly another African President, why not ours?

O, by the way, does a Presidential jet or a sitting President’s trips become wasteful and luxurious to us only when we go into opposition? Remember, Atta Mills, in opposition, criticized expensive travels, even announced early in his presidency that he abhorred the purchase of a Presidential jet. He bought one.

Now to the Convention People’s Party.

The political paradox of our Fourth Republic is that the CPP has more goodwill than all the other minor political parties in Ghana yet it garners the least, or nearly the least number of votes in every election, except one. The only time the party performed above average was when it went into alliance with the NPP, which alliance increased the party’s fortunes in Parliament and gave it two Ministerial positions.

Somehow, in spite of its abysmal performance, the CPP is the party that suggests itself to me whenever I consider a third force in Ghana’s Fourth Republican politics.

I was, and still am, convinced that any minor party that gains 5% of the votes in a presidential race will be in a position to force a re-run since neither NPP nor NDC can, in that event, obtain 51%. Five per cent will not put CPP in Jubilee House but it will become the kingmaker in the event of a re-run. To agree to throw in its lot with either of the big parties in the re-run, the CPP will negotiate a number of ministerial portfolios. The greatest advantage of a strong Third Force or Kingmaker is that it will automatically end the evil called “Winner Takes All”.

So who will go for CPP in 2024? It should be a candidate with an easily recognizable name, a candidate who not only makes sense but will carry the people with him. The only person left standing on the horizon, at this moment of writing, is Professor Badu Akosa. Human beings change, yes, but President Akosa will not be a greedy President. Equally important, he articulates issues better than many. The CPP can be sure of one thing about Akosa: he will not sell the party to the highest bidder from the NDC and NPP. Very important, for the CPP, is that Ghanaians love Akosa as one a few that can be described as “The Nation’s Doctor”. As a passionate advocate, he has become the trusted voice about lifestyle diseases. He is a name the people know.

The party will need money, yes, but next to money or even more than money, it needs a strategy that works. Why should the CPP struggle when it has wizards like Mr Eric Kwamena Benyarko, former Marketing Director of Lever Brothers (now Unilever) and former MD of Cadbury, a man credited with internationally winnable strategies?

The current chairman, that lady, is not bad at all as a leader. I see much progress ahead if the party encourages her to work closely with Nana Yaa Gyantuah, a dynamo of a lady as General Secretary.  With Akosa and the party chair, plus Benyarko and Nana Yaa, I see a deadly mix for the CPP. What is critical is for individuals in the party leadership to be less negative and give the team all the push.

DISCLAIMER: The Views, Comments, Opinions, Contributions and Statements made by Readers and Contributors on this platform do not necessarily represent the views or policy of Multimedia Group Limited.
Tags:
CPP
Enimil Ashon