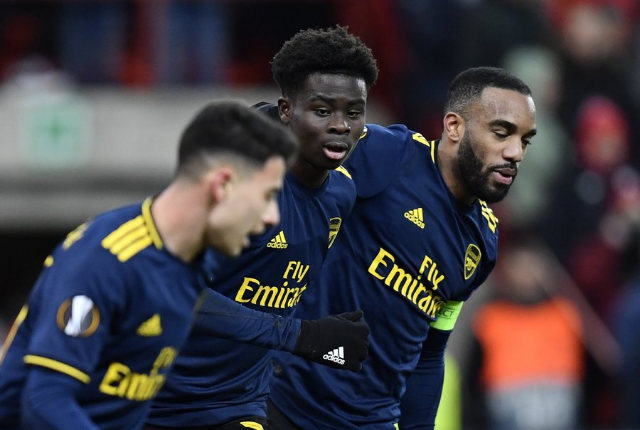 Arsenal came back from two goals down to draw 2-2 at Standard Liege and progress to the last 32 of the Europa League as group winners.

The Gunners were all but through before kick-off, with the hosts needing to win 5-0 to prevent the visitors from going through to the knockout rounds – a result that looked even more unlikely after a first half Arsenal edged.

However, Samuel Bastien put the hosts ahead just after the restart when his shot deflected off Sokratis and beyond the wrong-footed Emiliano Martinez.

The goal boosted the hosts but visibly knocked the fragile confidence of the Arsenal players, who became even more nervy when Standard Liege got a second as Selim Amallah’s strike from inside the area flew into the far corner via a slight deflection off Konstantinos Mavropanos.

It set things up for a tense final 20 minutes as the hosts pursued an unlikely result but Alexandre Lacazette settled the Gunners’ nerves when he converted a bullet of a header.

Bukayo Saka then equalised with 10 minutes to go, curling a neat finish into the corner to secure the draw Arsenal needed to top Group F

DISCLAIMER: The Views, Comments, Opinions, Contributions and Statements made by Readers and Contributors on this platform do not necessarily represent the views or policy of Multimedia Group Limited.
Tags:
Arsenal
Europa league