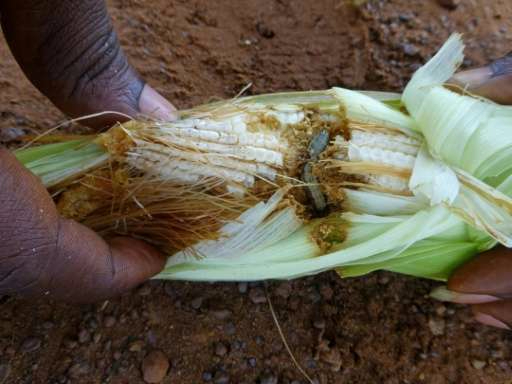 The Peasant Farmers Association of Ghana is mounting pressure on the government to declare a state of emergency as fall army worms ravage farmlands across the country.

With over 112,000 farmlands infected so far and 14,000 farms completely destroyed, the farmers say the situation poses an existential threat to the livelihood of about 4 million farmers whose farmlands have been infested.

“The effect of the fall army worm infestation is very serious; the situation keeps worsening,” observed Charles Koweh Nyaaba, Programme Officer of the Peasant Farmers Association of Ghana (PFAG) during a discussion on the situation on the Super Morning Show on Joy FM, Monday, July 17, 2017.

Mr. Nyaaba advised government to “declare a state of emergency and then we see how we can mobilize emergency funds” to immediately bring the situation under control.

Meanwhile, farmers are said to be resorting to traditional means of fighting the worms by preparing concoctions of detergents and pepper, to apply on affected farms.

This may sound rudimentary but it is working for the farmers, Mr. Nyaaba observed.

“In Tumu farmers have started using detergents -Omo [washing powder]- and mixing it with pepper to spray their farms; and it is working for them.

“According to them [farmers], that is what they are doing and it is more effective than the chemicals that the government is supplying to them,” he stated.

The government appears to be struggling to bring the situation under control.

But Kwesi Korboe, a USAID embedded Advisor at the Ministry of Food and Agriculture assured farmers, his outfit has the capacity to address the situation.

He said, “Chemicals covering an area in excess of 255,000 acres have been procured. We have the chemicals to address the situation”.

The fall armyworms are pests that wreak havoc on crops if left to multiply. These caterpillars mainly attack maize crops and eat everything in an area.

Once the food supply is exhausted, the entire "army" will move to the next available food source. The armyworms' diet consists mainly of grasses and small-grain crops. An infestation is hard to detect, as the caterpillars migrate to new feeding areas in the cool of the night.

When the caterpillars near maturity, they can lay waste to an entire crop in a few days. In 1998 Illinois, US was hit hard by fall armyworms.

In early 2017 armyworms infested large swathes of corn crops across Southern Africa, devastating the livelihood of many farmers.

It is thought they arrived from the Americas as armyworm eggs in imported produce. Many African countries have agreed to take urgent actions against armyworms.

Listen to the discussion in the audio attached: