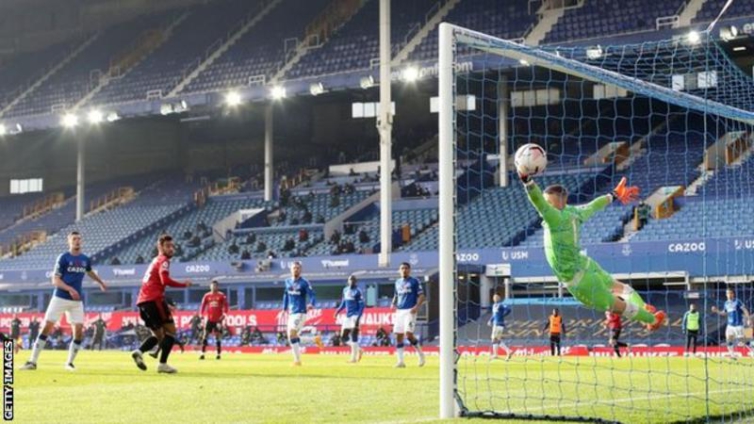 Bruno Fernandes’ double eased the pressure on boss Ole Gunnar Solskjaer as Manchester United got back to winning ways at Everton.

Following their calamitous defeat against Istanbul Basaksehir in midweek and a loss to Arsenal last Sunday, it looked like the visitors were heading for more negative headlines when Everton took the lead after 19 minutes.

Jordan Pickford’s punt forward was flicked on by Dominic Calvert-Lewin before Bernard found the bottom corner with a crisp strike.

But within the space of 13 minutes, Solskjaer’s team completed a turnaround.

They equalised five minutes after going behind when Fernandes ghosted into the box and headed past Pickford from Luke Shaw’s cross for his fifth goal of the season.

Then after Lucas Digne had hit David de Gea’s right post with a rising shot, United went ahead as Fernandes’s lofted cross towards Marcus Rashford dropped into the bottom corner.

There were further chances for a much-improved United before Edinson Cavani scored his first goal for the club on the counter-attack in the final minute of added time.

The win sees United avoid their worst start to a top-flight season after seven games since 1990-91, and gives Solskjaer breathing space as the Premier League heads into the International break.

Victory for Everton would have taken them to the top of the table, but they struggled to break down United after their opener and were thankful to Pickford who returned to the side and made several saves.

A third successive defeat means they remain fifth in the table as United climb to 13th.