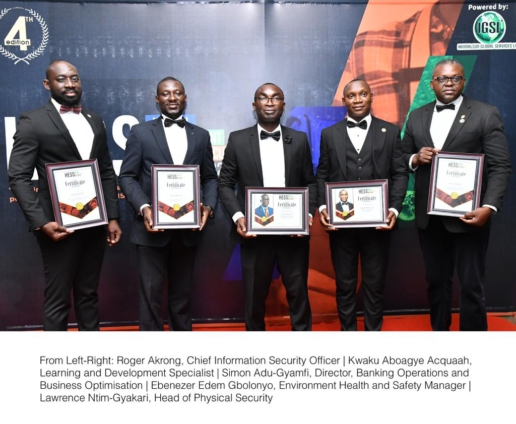 The Managing Director of Fidelity Bank Ghana, Julian Opuni, emerged the winner of the HESS Exemplary Leadership Award (Banking & Finance). At the same time, the Environment, Health & Safety Manager of the Bank, Ebenezer Gbolonyo, was adjudged the HESS Male Personality of the Year.

The HESS Award seeks to identify and celebrate health, safety and security-conscious companies that exhibit exceptional leadership and innovation in occupational Health, the Environment and Employee Stakeholder Safety and Security.

Speaking on the awards garnered, Managing Director of Fidelity Bank, Julian Opuni, stated that these awards are a testament to the Bank’s commitment to safety in all business spheres.

“Winning five awards in an award scheme that recognises the efforts of organisations in prioritising health, safety, security, and the environment is something Fidelity Bank is most proud of.

“This is a validation of all the work we do to ensure the safety of all stakeholders. We wish to express our appreciation to the organisers for this enormous recognition. I do not doubt these awards will spur us to do better than we already have.”

“I also wish to dedicate these awards to all hardworking staff of Fidelity Bank and our loyal customers whose support and loyalty continue to urge us to greater heights,” the Fidelity MD added.

Fidelity Bank was adjudged the winner in these categories considering its periodic security awareness training for all staff and partner agents.

It was also due to the recent upgrade of its electronic systems and steps the Bank has taken to put in place a remote backup for CCTV footage with AI functionality.

Additionally, the Bank’s initiative to train staff on general Health, Safety and Environment (HSE) issues, including emergency preparedness and procedures concerning first aid and use of appropriate HSE signs as well as fire, flood and other occupational disasters, were factored into the awards.

The Bank’s capacity to monitor its full branch network, office ATMs and other collection points in real-time through an internet protocol from a central monitoring station, among other things, led to the recognition.

Fidelity Bank’s attainment of globally standardised ISO and PCI-DSS certifications were also acknowledged and contributed to the accolade of Best Company in Data Security Management.

The Bank continues to validate its positioning as an indigenous business with global standards and a pacesetter in innovation.