Finance Minister dialogues with AGI; promises National Development Bank will be a game changer for industry 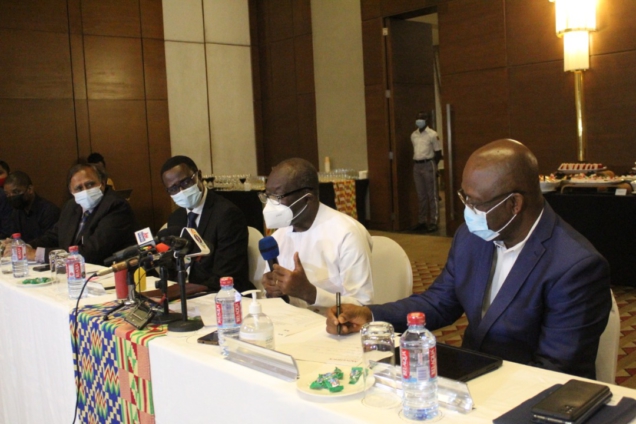 Finance Minister, Ken Ofori-Atta, says the National Development Bank which will take off from the end of July will be a game changer that will transform the country’s economy through industrialization and create more job opportunities.

This is because it will provide long term funding of up to 15 years repayment period to businesses, at relatively cheaper cost.

According to him, the bank will provide cheap credit for industries to grow, expand and offer jobs for Ghanaians.

“There are rigidities that we hope that the development bank will be able to cure, provide loans of up to 15 years, find ways of providing financial support, agreement and guarantees etc, to facilitate banking in a different way without the moral hazards.”

“We’re going to get a much more excited environment [banking] going forward, which we will seek to address some of these things [inadequate access and cost of credit]. And you can see really a gradual progress from the courage to attack the problems of the banking sector, the beginning to think through the development bank as an intervention that is required. We also look at the capital market master plan which we put together to also see how we can really bring live to our stock market which should be a viable option for industry and also support green and brown financing as we see young people getting entrepreneurial going forward’, Mr. Ofori-Atta said.

“So we will continue with the issue of macro stability because it’s something we cannot put aside if we are able to forecast and feel confident about the future and reforms, to continue to strengthen the financial sector and stronger national support for the private sector and entrepreneurship going forward. We’ll also keep an eye on the competitiveness along the region in areas such as energy so that more people will cut out smuggling etc. So that we will be more effective”, he added.

The President of the AGI, Dr. Yaw Adu Gyamfi told Joy Business, businesses have been recovery albeit slowly after covid-19 restrictions eased.

However, he expects some further reliefs from government in the Mid-Year Review Budget that is expected to be tabled before Parliament latest by August this year.

“Of course, when the budget was read for 2021, many companies were affected with the increase of taxes that came and as a result also affected us in terms of our revenue. So  weare expecting this [tax/levy reviews] to happen in the mid-year review budget”.

On the National Development Bank, Dr. Adu Gymafi said “from the discussion that we’ve had with the ministry, they have done a lot of work in terms of going to kfw [German Development Bank] that he [Ken Ofori-Atta] mentioned. This is a development bank, this is not a depository bank, nobody has asked us to go and put money there; that is the major difference. In in terms of governance, the policy, a whole law that has been passed by Parliament for its implementation. This should not be the same as NIB or ADB and we are hoping for the best. We will ensure this bank survives, so we have long term funding for businesses.”

The Corporate Dinner Series brought together captains of industry, from manufacturing, agro processing and pharmaceutical.

The players however expressed worry about the reduction in Benchmark Port Value by 50%, which they say is making them to lose market, because of influx of imports.

Some claimed they’ve been forced to reduce their operations and thereby staff strength because of high import.

Government in 2019 announced drastic reduction in the benchmark values against which duties paid by importers at Ghana’s ports are calculated.

With the exception of vehicles, goods were reduced by 50 percent, while that for vehicles was reduced by 30%.

The move was to reduce the cost of imports at the ports.