Fire breaks out at 'Downton Abbey' and 'Peaky Blinders' set in U.K - MyJoyOnline.com

Fire breaks out at ‘Downton Abbey’ and ‘Peaky Blinders’ set in U.K 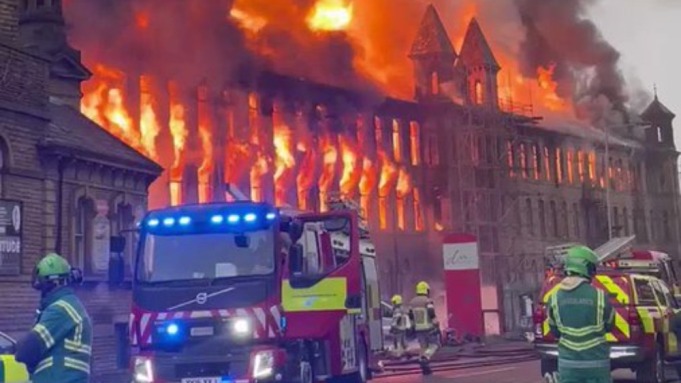 Confirming the incident, the West Yorkshire Fire and Rescue Service posted on their website: “We currently have fire engines & specialist units in attendance at a fire at Dalton Mills, Keighley. There is a lot of smoke in the area & residents are advised to keep doors/windows closed. Please avoid travelling through the area.”

“We have 20+ appliances in attendance at a fire in Dalton Mill in Keighley,” an update added. “100% of building involved in fire. Hose reel jets & aerial ladder platform in use. Appliances from neighbouring brigades are also in attendance. Partner agencies in attendance – Police, Ambulance, Yorkshire Water and Environment Agency.”

“There is a large fire service presence around the incident so please give crews space to do their job safely,” said a further update. “Please do not visit the area or travel into the area. Keep doors/windows closed.”

“It’s one of those amazing locations that is like a destination in its own right,” Knight told the BBC. “It’s got the kind of provenance and scale that could attract film-makers from far and wide.”

As well as “Peaky Blinders” and “Downton Abbey,” Knight said that part of the site had been transformed into London’s Victorian-era East End for the 2016 film “The Limehouse Golem,” starring Bill Nighy.

The extent of the blaze was revealed by an image from television cameraman Malik Walton and footage from PM Breaking News.

Dalton Mills is a prime shooting location listed on the Screen Yorkshire website. It was once the largest textile mill in Yorkshire, employing over 2000 workers, built by Joseph Craven in 1869.

“The distinctive mills offer a range of large scale spaces and historic features, including a large courtyard and recently renovated clock tower. It is able to accommodate on site production offices and workshops and has suitable parking for facilities vehicles,” the Screen Yorkshire website states.

“Dalton Mills is building a strong reputation as a filming location, thanks to its diverse range of industrial spaces, which offer an historic industrial backdrop as well as set build space, making it ideally suited to period dramas,” the website adds.

Other productions to have shot there in recent years include BBC dramas “The Great Train Robbery,” “Gunpowder” and “To Walk Invisible.”