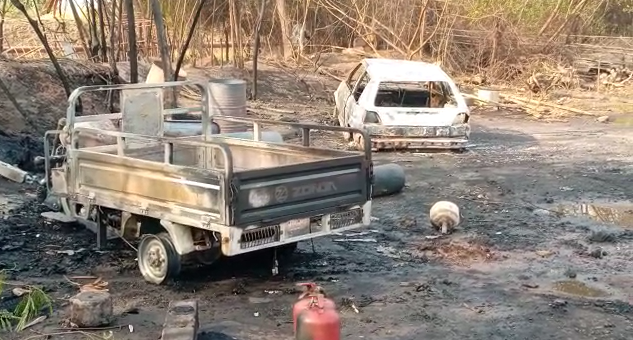 A fire outbreak which occurred near the Bulk Oil Storage and Transportation Ltd (BOST) Accra Plains Depot, has destroyed one saloon car, a tricycle, bicycle and some tanks containing petrol and diesel.

The fire occurred at a station less than 20 meters from one of the storage tanks at BOST premises where illegal trading of petrol and diesel is being carried out.

According to the Ghana National Fire Service (GNFS), the fire, which started at about 2:15 pm on Tuesday could have spread to the BOST premises close by, but for the intervention of personnel of the Service.

“At about 2:30 pm, we received a call from our fire master control that there has been a fire outbreak at BOST. But when we arrived, we realized that it was rather the petrol and diesel sellers close to BOST, where the fire outbreak had occurred. We noticed the fire was spreading to BOST premises so we stationed one team at the premises of BOST to douse the fire while the other team fought the fire at the premises of the petrol and diesel sellers. We used about 20 minutes to fight the fire,” he narrated.

He noted that despite several warnings by the Service for the illegal fuel traders to halt their activities, the traders have refused to stop their illegal activities.

He said however that no casualties were recorded.