Flashback: When Black Stars' bus was burnt in Lagos after 1973 Nigeria game - MyJoyOnline.com

Flashback: When Black Stars’ bus was burnt in Lagos after 1973 Nigeria game 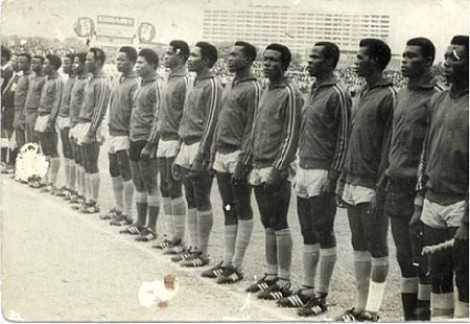 The euphoria at the Moshood Abiola Sports Stadium in Abuja was marred by a surge of agitated football fans on Tuesday, March 28.

Prior to that, Thomas Partey’s 10th-minute screamer sent the pockets of Ghanaian fans at the stadium into a frenzy.

Back home in Ghana, it was an earthquake of jubilation as cars honked on major streets awaiting the 90 minutes plus the referee’s added time.

Nigeria’s equalizer 12 minutes later was not enough to snatch the World Cup ticket in the face of a goalless draw in Kumasi last week.

This result did not go down well with the mammoth crowd of Nigerians massed up in the stands who felt disappointed by the end of the 90 minutes.

Hundreds of them in the 60,000 capacity stadium broke the barricades and headed towards the tunnel to launch an attack.

Ghanaian players and supporters had to be quickly taken out of the stadium to avoid further attacks.

But the vandalism continued. Amid tear gas, the angry fans thrashed the place and threw objects down the tunnel at their team.

It later emerged that an official of CAF had died. It was not clear if it was due to the situation in the stadium.

Update: His name is Dr Joseph Kabungo from Zambia. He was on duty as Doping officer. He collapsed suddenly and died. Cause of death not confirmed yet. His family, the Zambia FA and the government of Zambia have been duly informed. https://t.co/6wJVOQUWWy

“He was on duty as Doping officer. He collapsed suddenly and died. Cause of death not confirmed yet. His family, the Zambia FA and the government of Zambia have been duly informed,” he posted hours after the chaos.

Considering the volatile nature of the situation, Black Stars players and the management team were flown back into Ghana and were settled in by 3 am on Wednesday.

But this was not the first time such an ordeal has been recorded in Nigeria involving Ghana’s senior national team.

Previous fracas back in 1973 led to the burning of the team’s bus after the Black Stars beat the Nigerians 3-1 to crash the latter’s hopes of qualification.

The match, involving the two West African rivals, ahead of the FIFA World Cup in West Germany the next year saw an abrupt end.

Though the Black Stars’ hopes of playing in the Mundial the next year would be truncated, the violence on that day in Lagos would be a prequel to Tuesday’s disaster.

Here is how the Daily Graphic reported what happened on that Monday, February 12, 1973.

Pandemonium broke out at the Lagos stadium on Saturday soon after the Black Stars had scored their third and winning goal in their World Cup elimination match against Nigeria.

Stones and bottles were thrown onto the pitch in protest as the Black Stars jubilated.

But the jubilation could not be sustained when the spectators surged onto the field.

At this point, the Lagos State Military Governor, Col. Mobolaji Johnson, personally led a team of armed personnel to protect the Stars.

The troops escorted the Stars off the pitch.

A rough deal was, therefore, unleashed on the Ghanaian supporters who accompanied the team to Nigeria.

It was during this onslaught that the supporters’ bus was set on fire.

The fire-wrecked van was still smouldering yesterday morning. The Nigerian troops had to use tear gas to disperse the angry crowd.

According to a BBC news bulletin, the game was abandoned soon after the Ghanaians had scored the winning goal.

This was after a Nigerian defender under pressure handled the ball in the box.

In the 40th minute, Nigeria earned a free-kick just outside the penalty box.

Confusion arose in the Ghana penalty box after the kick gas been taken, and Yakubu Mambo exploited the situation to put Nigeria back in the lead.

Ghana redoubled her efforts on resumption.

Centre forward Kwasi Owusu who hit his former goal-grabbing form, made several breakthroughs but the Nigerian goalkeeper made significant saves.

In the 55th minute, left-winger Malik Jabir, who played a real captain’s game sent an intelligent pass to Kwasi Owusu to score the equalizer for Ghana.

Nigeria, after the equalizer, quickly changed their pattern of play, but the Stars found an antidote to their style and forced them to play a defensive game.

It, therefore, came as no surprise, when Kwasi Owusu scored the match winner in the 82nd minute in a goalmouth scramble.