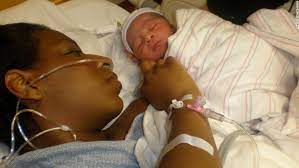 A new mother and her baby

A Pharmacist and Research Fellow at the Centre for Democratic Development (CDD-Ghana), Dr Kwame Asiedu Sarpong has entreated the Ghana Health Service to intensify public education on the entitlements of pregnant women under free Maternal Healthcare policy.

“The Ghana Health Service, the Ministry of Health should undertake public health education for women to know what their rights are and ensure that notices are in these hospitals to explain that no charges are supposed to be paid,” he told Kojo Yankson on the Super Morning Show, Wednesday, June 9.

Dr Sarpong’s call follows revelations made in a documentary produced by Corruption Watch Ghana and aired on the Show, to the effect that pregnant women are made to pay for the cost of prenatal (before birth) and postpartum (after birth) care, contrary to provisions of the National Health Insurance Act, 2012 (Act 852).

Under the NHIS programme, pregnant women are to receive such services at no cost to them.

But the Corruption Watch sponsored documentary, uncovered several instances at various hospitals, where the expectant mothers, were made to pay huge sums of money before being taken care of.

Matters get murkier when holders of the National Insurance Health Card are told to make down payments before service is rendered.

Some of the pregnant women, who could not afford the cost, were left with no option than to go on a borrowing spree or face death.

Dr Asiedu Sarpong, who was appalled by the details of the documentary, blamed the situation partly on lack of knowledge about the provisions of the NHIA Act, on the part of pregnant women.

He contends that there should be no circumstances under which anyone is paying a dime when going through the process of childbirth.

“You have the patient who doesn’t know what is covered under the NHIS and what is not. So you have a situation whereby the person who has to benefit from the right doesn’t even know their rights. So there is a failure of health education because the mothers do not know what their rights are when they are going to give birth,” he said.

He further called for sanctions against persons and institutions involved in such illegal acts.

“It’s either those in charge of the law are plainly oblivious or are being outright dishonest. Either way, it is the negligence of duty.