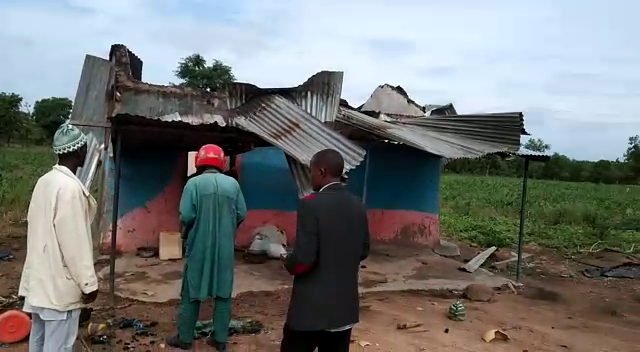 A small settlement of Fulani people at Widnaba community in the Bawku West District of the Upper East Region was attacked at midnight, Monday.

The attack is said to have been carried out by some angry youth in the area, who suspected the Fulani to be behind some recent armed robbery and motorbike snatching incidents in the area.

Some 18 mud houses belonging to the Fulani were set ablaze and burnt to ashes.

Valuable properties, including health insurance cards and cash, were allegedly burned or stolen during the raid.

Children in the area are said to have fled their homes into nearby bushes, ostensibly upon their Fulani parents’ instructions, who feared they would be killed. However, the children returned to the community the next morning.

Police say the youth carried out the attacks allegedly because a stolen motorbike was found in the house of one of the Fulani people.

A Regional Security Council [REGSEC] team led by the Upper East Regional Minister, Stephen Yakubu, visited the area on Monday afternoon to inspect the damages caused and assure the Fulani community of their safety.

Haruna Sulemana, a Fulani man from the area who was not at home at the time of the incident, told journalists that he was called and informed that his people were under attack, and by the time he arrived with police, the damage had already been caused, and the assailants were nowhere to be found.

“Actually, we don’t know what caused the problem because we didn’t do anything [wrong]. We were in Zebilla, and I received a call that some people attacked our people here, so we should bring the police. So I rushed to the police station and informed the police, but when I got here with the police, I found out that our people had run away and they [the assailants] burnt everything”, Sulemana said.

“Our rooms, our mothers’ rooms, everything! I don’t know what they took out [of the houses]. Everything has been burnt. Our food, maize, cloths, motorbikes; everything including health insurance [cards], ID cards and Ghana cards all have been burnt”, he added.

Upper East Regional Police Commander, DCOP Dr Sayibu Pabi Gariba, who was at the scene with the REGSEC team, told journalists that the police found that livestock belonging to the Fulani were also killed during the attacks, while some properties were allegedly stolen by the assailants.

“Our information indicates that some unidentified men from Widnaba attacked the Fulani community, burnt their houses, killed their animals, [and] stolen their properties”, he said.

“The Ghana Police Service does not encourage instant justice. For example, if a motorbike is lost or stolen and you find it in somebody’s house, the best thing to do is report to the police [but] this; they did not do. We are investigating, and I can assure you that we will get to the bottom of this matter, and whoever is arrested will be dealt with according to the law”, DCOP Dr Gariba said.

He directed their leadership to compile the names of everyone who lost documents like ID cards and Health Insurance cards, so they could be assisted by government to have them replaced.

Together with the regional office of NADMO, the regional minister also presented some relief items to the Fulani community.

“When we get more items as we look for them, we will bring them to make you comfortable so that you can gradually get back to your normal life”, Stephen Yakubu told the Fulani.

The National Organizer for the Fulani Association Ahmed Barry, who also visited the community, appealed to the security agencies to ensure justice was served.

“When issues like this happen, it creates a lot of tension in the Fulani community. A crime is a crime. Let’s treat it as a crime. Let’s not treat crime as a tribe. Fulani is not a crime, so when we are dealing with a crime, let us deal with the people who committed the crime and not the tribe”, Barry admonished.