George Sarpong: 65 years of persistent uptick in road carnage – did we go or did we come? 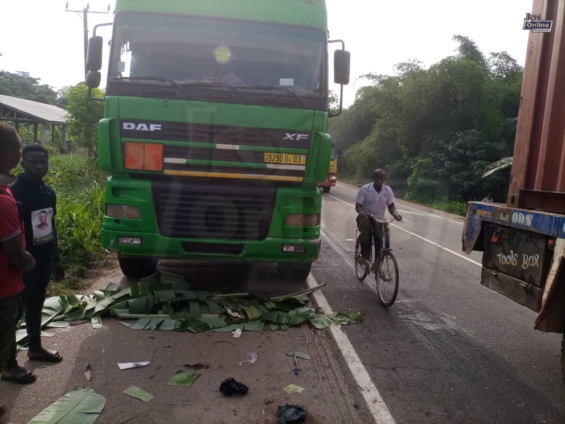 The Republic of Ghana, for some interesting but yet to be discovered reason, has a myriad of recurring challenges that predate 1989, the year of my birth. These include street hawking, dumsor, choked gutters, incessant general commodity price hikes, perennial flooding, ethnocentrism, chieftaincy and land disputes, to mention but a few.

Significant among the pool of challenges begging for redress is road traffic accidents. Unfortunately, due to the seeming inaction or the lack of commensurate efforts on the part of successive governments and other stakeholders, road accidents have claimed several lives, ended arguably bright destinies, and left several homes devastated.

At the height of the COVID-19 pandemic, I had an argument with one of my friends on the PIWC-Suame WhatsApp platform regarding why I thought some level of attention and energies ought to be channelled to curb the increasing carnage on our roads.

At the time, I was of the soundest conviction that the real pandemic faced by the country was road accidents and not COVID-19, a feeling that remains unchanged to date. For the veracity of my claims at the time, your guess is as good as mine.

As a Christian, sometimes I feel we overburden God in this country even with the things we have the knowledge, power, and fortitude to resolve. Would I be praying to God to protect me from potholes, poorly lit roads, malfunctioning traffic lights, nearly invincible road signs, high-speed ramps with no corresponding road signs, and significant driver indiscipline on the highway if I were in the Western world?

Unfortunately, the story in Umoufia falls short of global standards and best practices relative to road traffic management. In view of the foregoing, an attempt to pray our way out of what could be fixed with common knowledge, a little determination; and refocusing our energies on what ought to be prioritized may be at variance with logic.

Undoubtedly, road accidents don’t happen in a vacuum. As such, it is imperative to highlight the predominant causative factors including infrastructural deficits, driver indiscipline, and citizen responsibility. It is worthy of note that several accidents could have been avoided if the aforementioned challenges had been addressed earlier or considerable efforts invested to ameliorate same.

The litany of potholes on our major roads, poor illumination particularly at night and the non-dualization of major roads notably, the inter-city highways and malfunctioning traffic lights have occasioned a lot of road accidents with attendant loss of lives, injuries, and often, irredeemable damage to property.

Other key contributing factors to the carnage on our roads include non-adherence to long journey protocols and the lack of appreciation of road signs. It is trite knowledge that drivers neither ought to drink and drive nor drive tired. However, there have been instances where some drivers exceed the allowable threshold for long journeys in a bid to rake in more financial returns.

In the recent accident that occurred at Asuboi on the Kumasi-Accra road on March 13, 2022 which led to the death of nine persons including two students of the University of Education Winneba, the bus driver was allegedly asleep according to eye witness accounts.

Again, citizen responsibility has been noted to be one of the significant causative elements of road accidents. Do pedestrians appreciate the dangers on the road necessitating the need to observe certain safety protocols? How do passengers respond to carelessness on the part of drivers or distractions by other passengers that obstruct the driver’s focus?

It is worthy of note that the devastating effect of road accidents does not impact victims and bereaved families only. Road accidents have far-reaching economic costs for the State with other consequent ripple effects.

Following the death of Prof. J.M.K Quartey, Dr. Isaac Bentsi, and Dr. Benjamin Osei-Wiafe (all from the Urology Department of the Korle Bu Teaching Hospital), on the Bunso-Apedwa stretch of the Kumasi-Accra road in August 2005, the urology department of the Sunyani Regional Hospital was non-operational for several months, a development that undermined quality healthcare delivery.

The statistics on road accidents for the last three years are scary, to say the least. From 24th, to 26th December 2021, 133 accidents that led to 28 deaths were recorded. Be that as it may, the average deaths per day stood at a whopping eight deaths and a monthly average of 239 deaths by December 31, 2021. In the first 75 days of 2022, over 265 deaths have been recorded as a result of road accidents.

Whereas the North East Region recorded the least number of accidents (58 cases), Greater Accra Region recorded the most accidents (5,589 cases) followed by Ashanti Region (3,470 cases). By the end of September 2021, 8,608 private vehicles (42.5%), 7,093 commercial vehicles (35%) and 4,524 motorcycles (22.3%) had been involved in road accidents. What is striking to note is that more private vehicles (8,608) were involved in road accidents compared to commercial vehicles (7,093). This development contravened the usual trend. Could it be the case of a defective licensing regime?

Below is the death toll for the last 11 years culminating in a total of 25,685 deaths for the period under review, an annual average of 2,335 deaths, and a daily average of at least 6 deaths:

The persistent surge in fatalities underscores the imperativeness of instituting robust measures to mitigate the occurrence of road accidents. Again, certain control mechanisms may be set out to reduce the extent of damage to lives and property in the event of an accident.

To this end, the under-listed are recommended to avert road accidents and address the challenges that arise from same;

This Article was authored by George Sarpong, a road safety advocate, award-winning author (The Ballot Bag) and a policy analyst.

PS: The statistics used in this article is sourced from the Motor Traffic Directorate of the Ghana Police Service and the National Road Safety Authority.

DISCLAIMER: The Views, Comments, Opinions, Contributions and Statements made by Readers and Contributors on this platform do not necessarily represent the views or policy of Multimedia Group Limited.
Tags:
George Sarpong
Ghana
Road Carnage