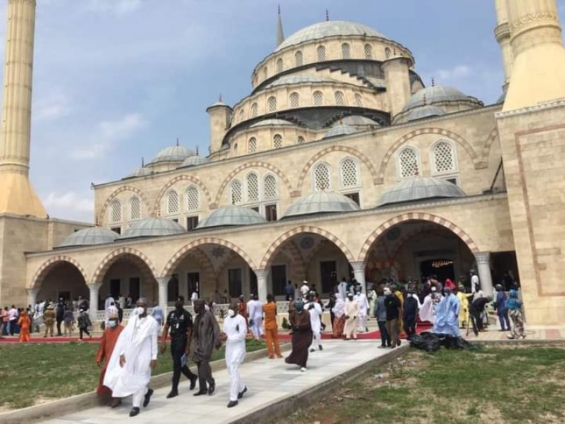 The Ghana National Mosque Complex, inaugurated on July 16, 2021, is a gift from Turkish Philanthropists to the Ghanaian Muslim Ummah.

The new $10 million 15,000-seater capacity ultra-modern national mosque built by the Turkish Hudai Foundation in Accra, with the support of the Turkish government, was built between 2012 and 2020, on a 40-acre land at Kanda.

The entire facility encompasses the Grand National Mosque, a recreational centre, a library complex, office and residence for the Chief Imam, a research complex, a Senior High School Complex, a clinic, an administration block, an auditorium, and a conference centre.

The complex is the largest of the modern type in West Africa. Built on the model of the Blue Mosque of Istanbul, it is also a sign of the close bond between the Islam of this part of Africa and Turkey.

A group of businessmen based in the Hudai Foundation paid for the facility.
The land for the mosque was handed over to the National Chief Imam, Shiekh Dr Nuhu Sharubutu, in 1995 by former President Jerry John Rawlings in replacement of a mosque demolished for the construction of the Rawlings Park in Accra.
Construction works were first started by ‘the Ghana Muslim Community’ but abandoned for almost 10 years due to the lack of funding.

However, the concerned Muslim Youth of Ghana took over by sourcing funds for the work to restart.

Partners who implemented the project were the National Chief Imam, Presidency of Religious Affairs of the Republic of Turkey, Human Development International (HUDAI) and Ghana Friendship and Solidarity Association (GANADER), and a Turkish Non-Governmental Organisations.

The symbolic monument is expected to nurture thousands of believers resident in Ghana and beyond, and expected to nourish the souls and enlighten the future, until the end of time.

The National Chief Imam, at the opening ceremony of the mosque, said the replica of the Blue Mosque of Instanbul stood for unity in diversity, peaceful coexistence for Muslims in a divided and conflict-prone world.

In a goodwill message, the President of Turkey, Recep Tayyip Erdogan, said “loving the creation because of the creator” was their most important envy as a country, and that the mosque complex was the best example of their country’s encompassing and inclusive approach to human beings.

He said “in addition to being a gift to Ghana, the mosque is also a symbol of friendship between Turkish nationals and the people of Ghana,” adding that the SHS, the clinic and other units within the complex would serve all Ghanaians without discrimination.
Since its commissioning, Muslims in Ghana have expressed varied views about the edifice.

Dr Rabiatu Ammah-Koney, Senior Lecturer, Department for the Study of Religions, University of Ghana, says she is excited about the commissioning, because “we waited for long.”

She described the architectural design as an icon and a grand edifice situated in a Muslim dominated area, with a serene and neat environment and that “praying in it for the first time is pleasurable.”

“…But while it is nice for the eyes to see, it is imperative that the heart also feels this nice edifice, so that it can guide our lives. We pray that the spirituality of the mosque is transformed into our social lives.”

Dr Ammah Koney, also noted that, when the mosque was commissioned, it was beautiful to behold and that the beauty and serenity that surrounded it should teach Muslims that, Islam is a beautiful religion that taught about hygiene and sanitation and so they must maintain the beauty.

“We must ensure that the whole place was sanitized and kept neat. Thus the Council and the Board must ensure that standards were maintained and guidelines put in place. Somebody must be put in charge and paid to keep the place tidy and anyone who floats the guidelines should be punished.”

The Deputy Greater Accra Regional Imam, of the Ghana Muslim Mission, Sheikh Ahmed Adjetey Adjei, says the mosque will help bring Muslims together as one unified Muslim community as has been communicated by Allah in Quran Chapter 3 verse 103, which says “hold firm to the rope of Allah together and do not become divided.”