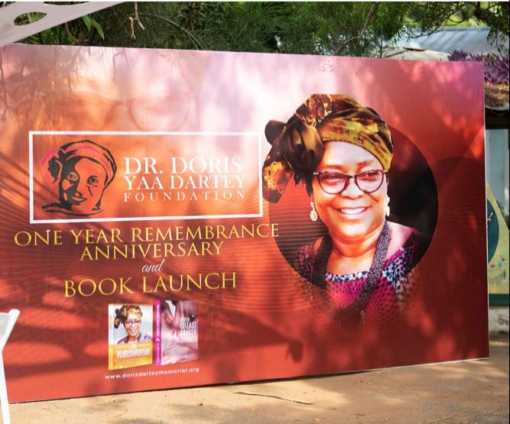 The Ghana Journalists Association (GJA) has indicated its commitment to immortalise the memory of Dr. Doris Yaa Dartey, a renowned Ghanaian journalist, who died last year.

This was disclosed by the President of the GJA, Mr. Affail Monney at the launch of two books authored by the late, Dr. Dartey, titled, ‘The Watch Woman: A compilation of Columns’ and ‘When Breast Cancer Strikes’ on Wednesday, August 4, 2021, in Accra.

The book launch was part of a ceremony to commemorate one year of her passing.

Mr. Affail Monney, noted that the immortalisation of Dr. Yaa Dartey has become necessary due to her absolute fidelity to the foundation and principles of journalism and tenacity to the cause of social activism.

“The death of an iconic journalist, demands the birth of another. I charge Dr. Dartey’s family in particular and the media, in general, to produce more Dr. Darteys in order to put Ghana firmly on the path of professional ascendancy”, he added.

The event was held to celebrate the indefatigable role the author played in raising professional standards of journalism in the country.

The Chairman of the National Media Commission, Mr. Yaw Boadu-Ayeboafo, launched the first book (The Watch Woman: A compilation of Columns). The second book (When Breast Cancer Strikes) was launched by a former President of the GJA, Madam Ajoa Yeboah-Afari.

Praising the efforts of the late author, Mr. Boadu-Ayeboafo, said Dr. Yaa Dartey was candid in her endeavours and made it possible for people to feel that their opinions mattered.

Mr. Boadu-Ayeboafo, in his eulogy of the late author, further stated that although sustaining a Column is somewhat difficult, Dr. Dartey provided clarity and simplicity in her writings and these hallmarks were the tools that sustained her Columns, which covered lots of topical human interest topics for 12 years.

Similar remarks were made by Madam Yeboah-Afari, who used the occasion to charge those present and the media, to campaign against Breast Cancer.

“Dr. Dartey’s audacious spirit, especially in having the boldness to write her story despite all she was going through deserves great commendation”, she added.

‘The Watch Woman’, is a compilation of carefully selected articles from her Column. The book is expected to give readers and journalists who love to read her stories, a befitting memoir, propel them to excel in their fields of endeavour as well as inspire both current and future Columnists.