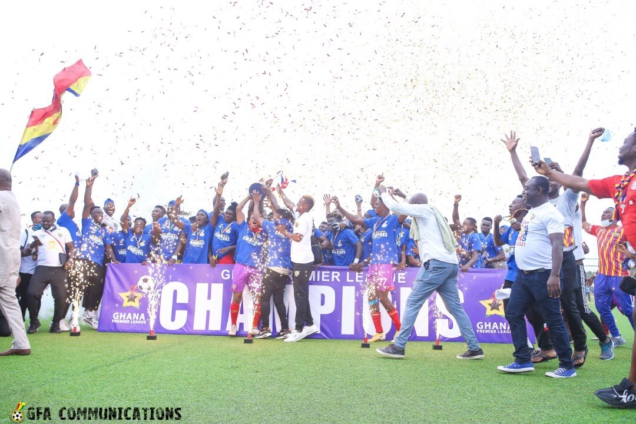 After lifting the Ghana Premier League title 106 days ago, Accra Hearts of Oak will begin their title defence on Sunday, October 31. In what could be a tricky fixture, a new look Accra Lions, will be the first visitors of the Premier League champions at the Accra Sports Stadium.

The appointment of Samuel Boadu saw Hearts produce a stunning change of form in the second half of last season, with Hearts ultimately winning their first league title after more than a decade.

However, after a heavy defeat to Wydad Athletic Club, which saw them exit the CAF Champions League, Boadu’s resilience will be tested against Legon Cities.

The Royals failed to beat the Rainbow lads in both of their encounters last season – their best being a 1-1 draw in the first round.

Playing at home in the reverse fixture, Victorien Adebayor’s 41st minute strike did not make any difference as Obeng Junior and Frederick Ansah Botchway scored earlier to give Hearts a 2-1 win.

After witnessing the trashing of the Premier League champions by WAC, it will be interesting to see how Cities’ head coach, Maxwell Konadu sets up his side to face Hearts.

History does not favour the Royals however, as Hearts have lost just one of their last five games at home to Cities, a 1-3 defeat back in April 2016.

Sunday’s game is scheduled to kick off at 3pm at the Accra Sports Stadium, and faithful of the Rainbow club will be eager to see their team matchup the start of bitter rivals, Asante Kotoko.

DISCLAIMER: The Views, Comments, Opinions, Contributions and Statements made by Readers and Contributors on this platform do not necessarily represent the views or policy of Multimedia Group Limited.
Tags:
Ghana Premier League
Hearts of Oak