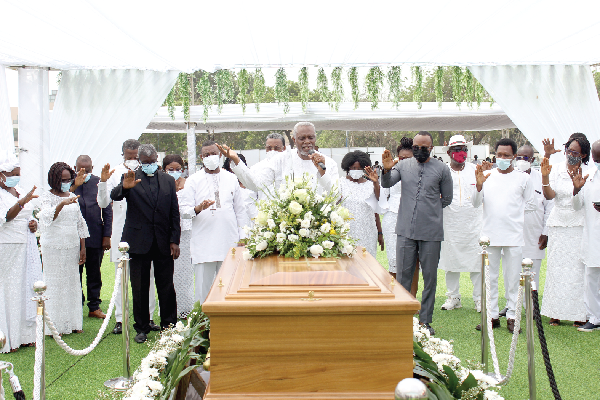 Dr Ishmael Tetteh (arrowed), founder of the Etherean Mission, praying for the remains of the late Torgbor Mensah. With him are some clergy men and women. Picture: Ernest Kodzi

Many Ghanaians yesterday paid their last respects to an advertising titan, Torgbor Mensah, at a well-attended funeral at the forecourt of the State House in Accra.

It was a solemn event with various tributes eulogising the statesman, who died on October 23 last year, for his immense contributions to the advertising and real estate industries of the country.

A sea of personalities including people from the media, advertising industry, the real estate industry, the business community, politicians, traditional leaders, clergymen, employees and partners, friends and sympathisers all thronged the State House for a befitting farewell ceremony.

Former President John Dramani Mahama, a member of the Council of State, Mr E. T. Mensah, the Director-General of the State Interest and Governance Authority (SIGA), Mr Edward Boateng, former parliamentarians, Mr Kofi Atoh and Akua Sena Dansua, were among the participants who were in attendance to bid farewell to the national icon, who was an accomplished advertising magnate, an industrialist, real estate developer and a philanthropist.

Many of the mourners, including the immediate family members, were adorned in all-white attire for the service to extol his accomplishments and the legacies he left behind.

The casket containing the remains of Uncle Tee, as he was popularly known, was ready for filing past as early as 7 a.m.

With the strict adherence to COVID-19 protocol, people were allowed to file past and pay their last respects.

The casket was closed at 9:10 a.m. after a delegation that represented the Asantehene, Otumfuo Osei Tutu II, made a donation to support the final funeral rites of the man he called his friend.

About half-past midday, after tributes and the biography of the late colossus, had been read, the casket containing his remains was lifted for a private burial.

Born of Ghanaian and Togolese parents, Mr Mensah started work as an apprentice at the age of 13 with Tropicana Advertising Services Company.

He was seconded to the Daily Graphic and later the Ghanaian Times to understudy the printing processes. He rejoined the company, which changed its name to become NAPDCO Advertising, which was in charge of all publicity for state enterprises as well as the Office of the President.

The company later became the Commercial Advertising Company (CADCO), a government-owned agency, around 1966. He worked as a Junior Clerk of no trade or profession, but systematically trained on the job under able supervisors to become a prolific graphic designer of great intellect ready to learn everything and anything.

When CADCO folded up around 1974, Uncle Tee teamed up with his creative mentor at CADCO, to form an Outdoor Agency called USAS.

Unfortunately, the partners of USAS did not stay together for long. The break-up of USAS enabled Mr Mensah to form his own company which he named Design and Display Publicity (DDP).

As a start-up, Mr Torgbor Mensah’s creative genius was put to the test, but the new company, DDP, proved a success.

He solicited outdoor contracts from agencies such as Afromedia, Lintas and GAM as well as other individual companies and for these jobs DDP executed to perfection.

Among these jobs were the erection of outdoor promotional signs contracted by the then Pioneer Tobacco Company Limited to DDP for Embassy signage along the major highways of Accra – Kumasi, Accra – Takoradi and Accra – Ho.

He made great contributions to trade fairs in the country. Torgbor is also the founder member and first President of the Ghana Real Estate Developers Association (GREDA) and the Advertisers Association of Ghana.

The eulogies poured in from family, friends and business associates who spoke highly of the character and his work.

His wife, Stephanie Adzimah, said Mr Tee was hardworking and dedicated most of his time to work.

“He was committed to giving back to his community, to individuals and, especially, the needy,” she said.

She added that Mr Tee impacted many lives and would encourage anyone and everyone around him to give of their best, always forge ahead and make the best of everything.

Touching on how she met him, Stephanie said they met at an official assignment and immediately he showed so much interest in her.

“One meeting led to another. We became friends, but he wanted much more than friendship. I was quick to identify and find solutions to some of his challenges and much more earned me his respect and love.”

In the tribute of his nine children, they said they would miss his advice and council, especially his daily examples of working hard, his messages and video calls to check on them and their annual family gatherings at Santa Yala.

“We will miss our deep thought discussion on anything and everything, the “toil” sessions, our trips to Accra villa in Togo, and even the simple things in lectures on gari, eating lots of greens and fruits all of which you love to the core. You were a dad like no other. The best anyone could ask for.

His Pastor, Dr Ishmael Tetteh, founder of the Etherean Mission, said Mr Tee might not be in the history of the nation but would be in the hearts of the souls of humanity.

A tribute by the Advertising Association of Ghana said without Mr Tee’s contribution, the association would not have been established.