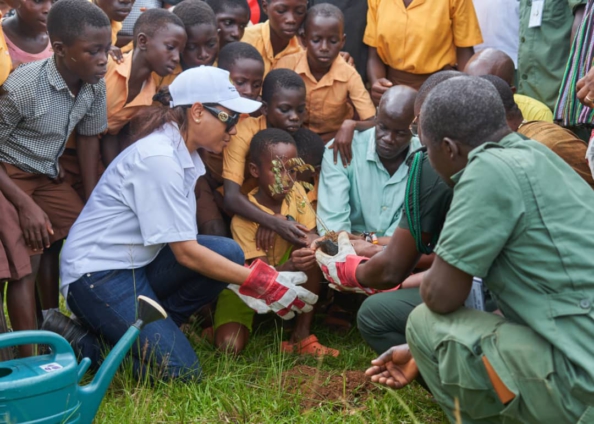 Residents of the Ellembelle district have been advised to plant trees around their homes and public buildings to naturally check impacts of erosion currently ravaging some communities in the district.

Chief Executive of Adamus Mine, Angela List, gave the advice when the mining firm together with some chiefs and the Forestry Commission planted trees in some communities.

She said that trees played significant roles in balancing the environment and checking other natural and man-made environmental disasters.

The mining company as part of their commitment to greening Ghana on Friday joined traditional leaders, students, and some community members to plant close to 10,000 tree species in their host communities.

This, according to the CEO is to avert deforestation, erosions and ultimately green the environment.

Madam List also called on mining firms to support the Green Ghana initiative by government since it’s one way to restore the vast lands destroyed through mining making emphasis on small scale miners.

She also hinted that the company is working with the Minerals Commission to release some of the company’s concessions for the small-scale miners to be used as community mining.

Forest Range Manager in charge of Nzema East and Ellembelle, Clement Kwakye said over the past years the climate condition of the district has changed drastically due to the continuous cutting of tress and other activities.

DISCLAIMER: The Views, Comments, Opinions, Contributions and Statements made by Readers and Contributors on this platform do not necessarily represent the views or policy of Multimedia Group Limited.
Tags:
Ellembelle
Green Ghana Project
Plant trees