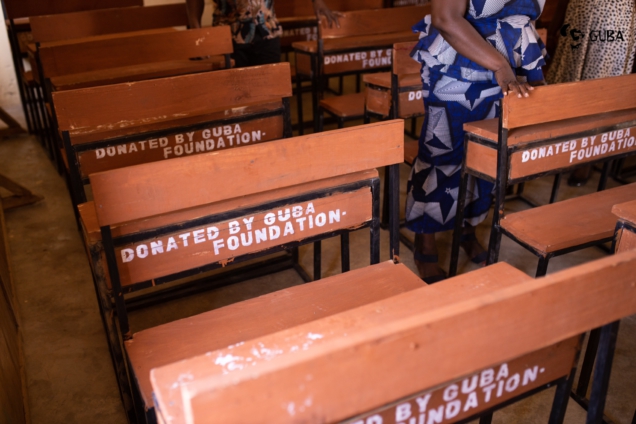 GUBA Foundation has donated furniture and school supplies to the Sakorit Primary School as part of the organisation’s community outreach and giving back project.

In all, 30 school tables and chairs were donated including books and toys to aid in teaching and learning activities.

The Foundation also painted various classrooms in the school.

Commenting on the gesture, GUBA Enterprise’s Founder and President, Lady Dentaa Amoateng MBE, said, “the act was part of the organisation’s giving back project and the Sakorit Basic School was chosen because of its critical needs.”

“We didn’t only give furniture, our partner in the UK, Hogan Lovells Law firm also assisted with toys and school supplies including books to assist the pupils in their studies. All we want to do is to continue impacting lives in positive ways” Lady Dentaa said.

The school’s Headmistress, Rita Alemya, expressed profound gratitude for the kind donation and assured them that the furniture would be well maintained for its purpose.

“This donation by GUBA is well appreciated by the pupils and would encourage them in their studies” Madam Alemya noted.

The District Director of Education, Madam Christiana Azure, was excited that the needs of the Sakorit Basic School attracted attention from a global organization such as GUBA.

She said the items would motivate the pupils to take their studies seriously.

Brief about the Sakorit Basic School

The Sakorit Basic School was established in September 1991 with a three-unit classroom block put up by the community members using mud.

The mud structure provided the community with lower primary education only, until 2005, when the Ghanaian government gave the local government the means to construct a three-unit classroom block to support the enrolment of upper primary pupils in the community.

In 2012, government again constructed a two-unit classroom block to accommodate those in kindergarten and also to decongest the classrooms of the later-stage pupils in the school.

The mud structure constructed by the community was destroyed by rainstorm two years ago, thus making it extremely difficult for the school to accommodate a large number of pupils.

In November 2021, Dagbon FM reported that pupils of the school were seen lying on their bellies to write on the chalkboard.

The pupils could only manage their laps or the concrete floor as the school lacks furniture and other teaching and learning materials.

These children are forced to do their class assignments on the bare floor and risk suffering from ailments associated with sitting positions.

DISCLAIMER: The Views, Comments, Opinions, Contributions and Statements made by Readers and Contributors on this platform do not necessarily represent the views or policy of Multimedia Group Limited.
Tags:
GUBA Foundation
Sakorit Basic School
Upper East Region