How Nigeria’s kings lost their power 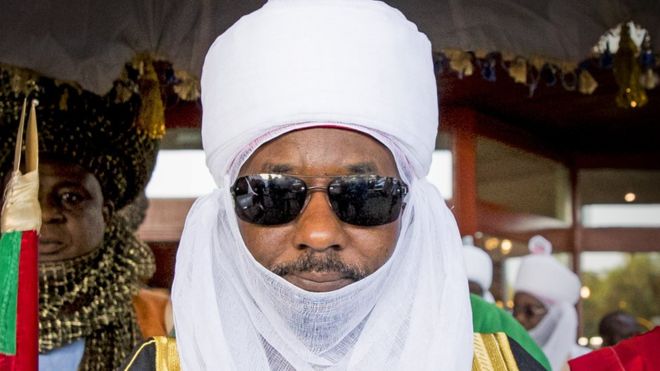 From emirs to kings, Nigeria’s traditional rulers are increasingly being humiliated by politicians – and mocked by young people who see them as representing an archaic institution.

The latest example of this was the brutal dethronement of the Emir of Kano, Muhammad Sanusi II.

The state governor invoked his constitutional powers to depose the emir after accusing him of “insubordination”.

No-one knows the number of monarchs in multi-ethnic Nigeria but there seems to be one ruling over every inch of land, often putting them at loggerheads with the politicians who have constitutional authority.

Nigeria’s traditional leaders retain huge influence in many parts of the country but recent events have made some young people question the role of the monarchy in the 21st Century.

Mr Sanusi is the most high-profile of several cases in the last five months in which politicians have publicly brought monarchs to heel or the actions of some traditional rulers have led people to question their relevance.

Mr Sanusi was removed for “total disrespect” of institutions and the governor’s office, the government said.

But in truth, his removal was the culmination of a long tussle with Kano state governor Umar Ganduje, a powerful figure within Nigeria’s governing All Progressives Congress (APC) party.

Those close to him say the emir expected his removal but not his banishment to neighbouring Nasarawa state which his lawyers described as an “archaic practice” of the colonial era.

After gaining a court order, he has regained his freedom but the manner of his removal and subsequent detention showed the real balance of power between politicians and traditional rulers.

“There is no way you can reconcile the feudal gathering of traditional kinship with the application of a modern republican constitution,” said Dr Jare Oladosun, an associate professor of history at Nigeria’s Obafemi Awolowo University.

He said it was an insurmountable contradiction and favours the scrapping of the monarchy.

“You cannot have both, only one,” he said.

For many, Mr Sanusi’s removal confirmed what they have long suspected – that the country’s monarchs are only symbolic heads with no real power.

Don’t shake your head when the governor is speaking

Nigeria’s constitution has no role for traditional rulers but they are nevertheless widely respected as custodians of both religion and culture.

And this can be seen as a form of power.

Olutayo Adeshina, a professor of history at the University of Lagos, said that by pledging to respect the culture “by protecting, preserving and promoting traditional values”, the Nigerian constitution recognises the important role of traditional leaders.

“Traditional leaders possess some latent power which politicians are afraid of, hence the tension between the two.

“If they are not relevant, the politicians would ignore them. But you ignore them at your own peril,” he said.

But anyone who watched a video widely shared on social media in January would question whether politicians still have much respect for traditional leaders.

A king in the southern state of Rivers was publicly ridiculed for shaking his head while governor Nyesom Wike was speaking.

The governor ripped into the mortified king in a gathering of traditional rulers, provoking laughter from those in the room.

“You just [go] and wear something that is bigger than you… to breach protocol.”

The governor was mocking the monarch’s traditional robe and elaborate crown.

In the same week that emir Sanusi was removed in Kano, traditional rulers in south-west Ekiti state were embroiled in a face-off with the governor after he appointed an oba (Yoruba king) to head the traditional council.

A group 16 local obas were not pleased with the “interference” and stayed away from state functions, drawing a stern letter from the governor who accused them of insubordination.

In November 2019, Nigeria’s Supreme Court dethroned another oba, in Oyo state, declaring the process of his ascendancy to the throne illegal.

Samuel Adebayo-Adegbola, who was the Eleruwa of Eruwa, had spent 21 years on the throne before he was forced to step down on the grounds that he was not a member of one of the town’s two ruling houses whose turn it was to produce a successor in 1994.

But it is not always the politicians casting aspersions on the monarchy in Nigeria – the actions of some traditional rulers have also put them in the spotlight.

In February, the Oluwo of Iwoland, Abdulrasheed Akanbi, a flamboyant and controversial oba in the south-west state of Osun engaged in a public brawl with another monarch, Dhikrulahi Akinropo, Agbowu of Ogbaagbaa.

Tempers flared at a meeting to settle a land dispute and Oba Akanbi is currently serving a six-month suspension for his part in the altercation.

But some monarchs are determined to remain relevant.

Oba Akanbi’s Instagram page is an album of very colourful pictures and in one post he talks about “21st Century Kings”.

“You think Kings can’t “Swag”!! 21st Century Kings like me will catch you unawares!!! You got it all wrong by thinking kings are just ‘old raggedy, sad looking, can’t dance, working with voodoo, scary looking, can’t have fun and only boring!!!” he posted.Skip Instagram post by emperortelu1

But such “traditional trendiness” has not caught on among young people and many took the opportunity of the emir’s dethronement in Kano to criticise the monarchy.

“Kings that have no authority, no armies, fight no wars, bear no responsibility for the development or prosperity of their domain.

“Yet we indulge in this pitiful fantasy of them being the all powerful as Kings who did all these and more in the days of yore. Too funny,” this user said.

This user wants them “dismantled” entirely:

Nigeria’s monarchs, from the southern coastal states to the horse-riders in the north, were once all-powerful.

A Yoruba oba could summon any woman – young or married – and pronounce her one of his wives, while kings in eastern Nigeria had the first taste of the new yam before their subjects could eat of their own harvests.

Between the 14th and 19th Centuries, these monarchs dealt with the Portuguese and British, trading in slaves, palm oil, groundnut, and led their people to war.

But one by one these kingdoms were crushed by the British as the different nations that make up present-day Nigeria were brought together to be ruled as a single territory from 1914.

The responsibilities previously carried out by traditional leaders were passed on to native administrators appointed by the colonial government.

They also wield considerable influence over local voters and politicians suddenly become friendly to them at election time.

“It is actually a sign of cultural progress to leave certain things behind and drop the excess baggage of an archaic institution that has outlived its usefulness,” said Mr Oladosun.

He argued that the influence of traditional leaders in the grassroots is because “we have retained them”.

Without any constitutional backing, Nigeria’s monarchs who wish to remain on the throne must master the art of staying out of the way of politicians who control power.

“Native intelligence is what traditional leaders need, it would help them realise when to speak and when to keep shut and generally keep them out of trouble,” Mr Adesina said.

Most monarchs in northern Nigeria have turbans covering their mouths – an indication perhaps that the skill of survival is in being seen rather than heard.

But this was something the outspoken Mr Sanusi was never able to do.