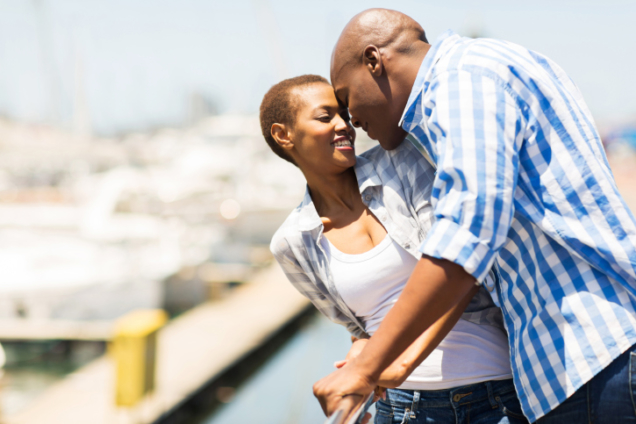 The last thing I expected from my senior year high school internship was to fall for an older, married man. I was looking to learn about the TV news business. I wasn’t interested in finding romance and I certainly wasn’t after a husband.

But when I met Tom our connection was immediate. He was 42. I was 18. He was old enough to be my father (though my real dad was 59 at the time). But the significant age difference didn’t impede the attraction either of us felt.

It was easy to forget about the 20+ years that separated us while I was busy daydreaming about Tom’s deep voice, hearing about his crazy, drug-fueled life in the 1970s, and seeing the authority and respect he commanded wherever he went.

Whenever we spoke, our age difference seemed to melt away.

Over several months, our relationship slowly progressed. We went from two people with a mutual attraction to an employee and intern that had crossed multiple lines.

For the first time in my young life, I felt confident and knew our relationship was the major reason. The early stages of our affair were exhilarating. I always thought I was having a much better time than my classmates.

But the reality was not far from my mind. A quarter-century age difference was extreme.

And Then My Parents Found Out. And His Wife.

A month prior to the end of my internship, my father, a retired Nassau County, N.Y. detective confronted Tom outside a local hotel early on a dark, dreary Saturday morning. Word was out on our affair, and it wasn’t pretty.

My mom and dad couldn’t believe their daughter had spent the night with a much older, very married man.

Andrea, Tom’s then-wife, was distraught — and rightfully so. My parents made me call her to apologize, and the conversation was agonizing. What do you say to the wife of the man you’re madly in love with?

“I’m sorry I had sex with your husband” doesn’t really roll off the tongue, especially when you’re far from sorry, and your connection with her husband is stronger than hers.

I also figured it best to forgo telling her I loved her husband. It’s not exactly what a wife wants to hear from another woman.

Morally, I knew our actions were wrong but Tom was no longer in love with his wife. At that point, their marriage was only a bond represented on paper. I was legally an adult and in love, and not remorseful for my lustful actions. I also knew our feelings for one another were genuine.

It pained me to hear others categorize my feelings as a crush, or say that I was just falling for him because I was desperate for male attention. I couldn’t believe all the passion, adoration, and heartfelt laughs between us were fake or wrong.

There Are Definite Perks To Dating An Older Man

The lies we told to steal moments together were dishonest, but our love was real.

About a year later, after Tom had spent many a night in my college dorm room, our romance was still in full force, and Andrea finally told Tom he had to leave their home. He hadn’t left yet because uprooting yourself from your job, children, family, and life as you know it isn’t a Tuesday afternoon task.

It takes months of saving money, planning, and goodbyes. Several months later, we had an apartment together in downtown Philadelphia.

Although it wasn’t always easy, the more time passed, the more we realized our fight to keep our relationship afloat was worth the effort. After living together for four years, we married in October 2003.

Even though no one freely admits this, there are advantages to dating an older man. They have better emotional stability and a stronger sense of what they want out of life and a relationship. Older men are more capable of caring and not just thinking about themselves.

And let’s just hope that a 45-year-old man has a better grasp on his finances than his 25-year-old counterpart.

Plus, the sex, in my experience, is spectacular. An older guy knows the importance of sexuality and sensuality. He cares about learning the curves of your body and knowing what makes you curl your toes.

He notices if he does something that makes you cringe with revulsion. Mature men appreciate your youthful, supple flesh in a way younger men can’t since they’ve seen firsthand what happens with age.

And There Are Some Downsides

Of course, all these benefits come with a price, like the dark winter day I crouched in his attic before being confronted by his wife, or the mix of euphoria and complete self-hatred I felt on the warm summer morning Tom and I drove away from his home, leaving behind his wife and two young children.

But it’s said that nothing in life is easy, so when I found true love—the man I firmly believe to be my soul mate—I didn’t walk away because the situation was complex.

If living with Tom’s children on weekends meant I could live with Tom for the rest of my life, I was game. It wasn’t a difficult decision to make.

In any relationship, you learn to take the good with the bad, but when you get involved with a much older man, you definitely have to be prepared to be judged. People, other women mostly, will wonder if you have ulterior motives and think there is no substance or love to your relationship, just blow jobs for money.

Middle-aged women often gave us looks of total disdain, and one even flipped us the bird on our wedding day.

Add to that your parents, who are likely to be concerned about your well-being. They’ll wonder if you’ll truly be happy with someone who was out of college before you were even born. They may mention that he’ll likely die before you and that you’ll be left alone.

My parents were certainly filled with anxiety about my decision, but I stood my ground and let them know they could not force me to change the way I felt.

My mom came around to the idea faster than my father, as I think is to be expected. After she spent time with Tom, she understood why I was in love. So while you may be tempted to keep your parents and your older man apart, letting them interact is crucial.

Let them see why he makes you smile.

Jealousy Is Only Natural

If anything, jealousy is sometimes an issue. Sure, any of us can exhibit the green-eyed monster, but in large age-gap relationships, this is more of a factor. In my experience, Tom was terribly jealous about me being surrounded by guys my own age when I was in college.

But by far the biggest factor in a relationship like mine is baggage. Are you ready to deal with your boyfriend’s children? What about his ex?

You must understand that an older man led a lot of life before he met you and accept his past to make your future together work. My advice: Don’t get hung up on the paths he took earlier in life. Focus on your life as a couple and what you want to achieve together. When people look at Tom and me, maybe they see our age difference, but hopefully, they just see a happy couple in love.

DISCLAIMER: The Views, Comments, Opinions, Contributions and Statements made by Readers and Contributors on this platform do not necessarily represent the views or policy of Multimedia Group Limited.
Tags:
Love
Soulmate