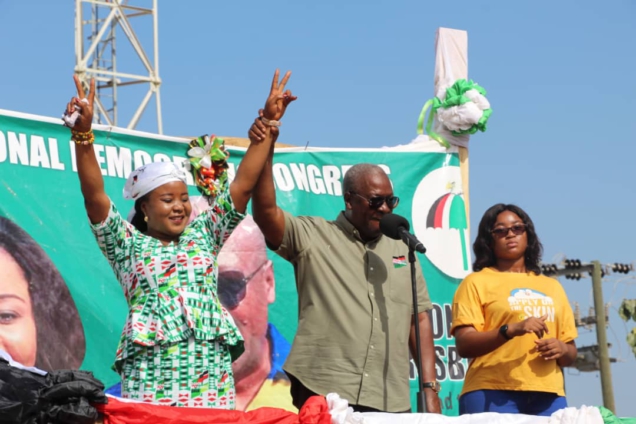 The flagbearer of the National Democratic Congress, John Mahama says the recent sod cuttings being undertaken by President Akufo-Addo are only aimed at wooing voters ahead of this year’s elections.

Whilst describing the move as a panic reaction, the former Ghanaian leader who is seeking re-election predicted that the government will halt all the projects after it wins the elections.

Addressing a rally at Donkorkrom in the Kwahu Afram Plains North district as part of his campaign tour of the Eastern Region, Mr. Mahama said:

“It shouldn’t come to you as a surprise at all if they come here to cut sod for the construction of your road. The president hasn’t been able to do anything for you since you voted for him to be president, so what he is doing is to create the impression that he’s working but in reality, he knows he is doing that because of the elections’’.

The former president touting the NDC’s developmental achievement in the Afram Plains area promised to construct an asphalted road from Ekye-Amanfrom to Amankwatonu which has been in a deplorable state for many years.

“The NDC has a record of developing the Afram Plains. Since the era of President Rawlings, every development in this area from the provision of electricity, roads, telecommunication network, education and health infrastructures were all built by the NDC so I do not think anybody will doubt us when we say we will build your road,” he stated.

On health, Mr. Mahama said his next government will build a referral hospital in Afram Plains to cater to the healthcare needs of the people.

As part of the campaign, he used the opportunity to introduce the NDC Parliamentary Candidate, Betty Krosby Mensah to the people.