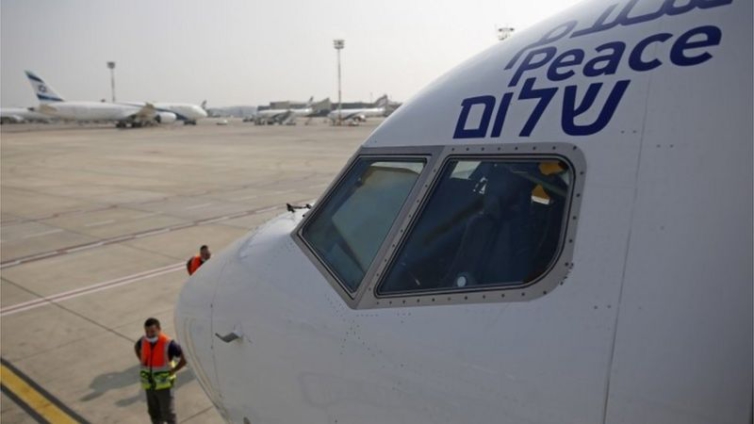 The first commercial flight from Israel to the UAE is taking place, marking a major step in normalising relations after the announcement of a peace deal.

An Israeli El Al airliner will make the three-hour trip, carrying a delegation of Israeli and US officials.The flight is being allowed to cross Saudi Arabian airspace, normally blocked to Israeli air traffic.

This is a hugely significant step for the region. Great news 👍

The UAE became only the third Arab country in the Middle East to recognise Israel since its founding in 1948.

On Saturday the UAE repealed a law boycotting Israel which had been in place since 1972, and earlier this month the two countries opened direct telephone services for the first time.

The agreement to normalise relations – brokered by the US – was made public in a surprise announcement on 13 August.

Mr Kushner led secret talks which resulted in the Israel-UAE agreement.The joint teams will meet Emirati representatives to develop areas of co-operation between Israel and the UAE.

The return flight will be numbered LY972, after Israel’s international dialling code.

In a tweet in Hebrew, Israeli Prime Minister Benjamin Netanyahu hailed the advent of the flight as an example of “peace for peace” – alluding to his long-held disbelief in the notion that only trading occupied land will bring peace between Israel and Arab countries.

While it was welcomed by much of the international community, the UAE’s recognition of Israel without the precondition of the creation of a Palestinian state was denounced by the Palestinians as a betrayal of their cause.

In return for official relations with the UAE, Mr Netanyahu agreed to suspend controversial plans to annex parts of the occupied West Bank – land claimed by the Palestinians for a future state of their own.

Before the UAE, Egypt and Jordan were the only other Arab countries in the Middle East to officially recognise Israel, after signing peace treaties in 1978 and 1994 respectively.

Mauritania, a member of the Arab League in north-west Africa, established diplomatic relations with Israel in 1999 but severed ties in 2010.