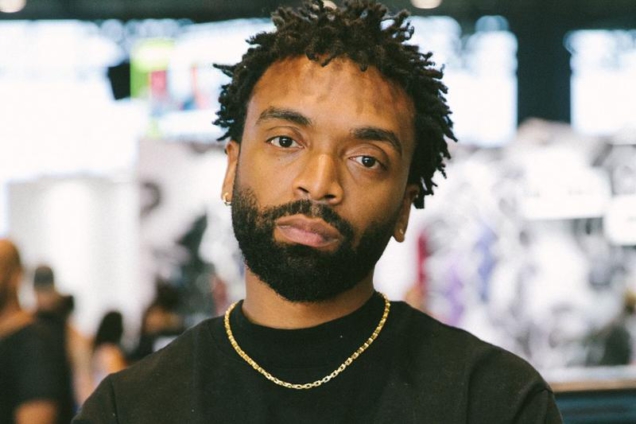 Much has been written about the rapid ascent of Kerby Jean-Raymond. Indeed, the designer appeared to rise to prominence quite suddenly in 2015, after he used his show at New York Fashion Week to protest police brutality.

But Jean-Raymond, founder of the ground-breaking label Pyer Moss, has been in the industry since the age of 15, when veteran designer Kay Unger took him on as assistant designer.”It took me 18 years to become an ‘overnight success’ in fashion,” he quipped at his studio in Manhattan.

Regardless of how he got here, Jean-Raymond, now 32, is continuing the upward trajectory. Last November, his label won the CFDA/Vogue Fashion Fund award, one of the most prestigious and highest-paying awards in fashion.

The prize, alongside a recent deal with Reebok, has helped him focus on what he does best: telling stories through fashion.”We are 80% storytelling and 20% product,” said the designer, who described Pyer Moss as “an art project that operates in the fashion space.”

A case in point is Jean-Raymond’s latest project, “American, Also”: a three-part retelling of the American story, told through a series of collections.The first instalment, encapsulated in Pyer Moss Fall-Winter 2018 campaign shed light on the role of black cowboys — figures often overlooked in the western whitewashed narrative.

In part two, for Spring-Summer 2019, Jean-Raymond asked artist Derrick Adams to produce 11 artworks depicting the everyday lives of black families, which he turned into garments and sent down a New York runway. The third chapter of the story is set to be revealed in September 2019.

The thoughtful campaign epitomizes Jean-Raymond’s intention to bring substance back to fashion, while carving himself a meaningful space in a world that often values speed over deliberation.Pyer Moss’ strategy is to move slowly and avoid being seen as just a “trending brand” (or one that “made a cool thing” with Reebok), he said.

And while most designers would probably express similar sentiments, Jean-Raymond’s claims have credence: The label decided to sit out New York Fashion Week this month — the source of significant publicity in recent years.

Jean-Raymond is all too familiar with the dangers of moving quickly. Shortly after setting up Pyer Moss in 2013, he took an early investment that almost cost him the business.

“I took money from investors really early in 2014, and I didn’t understand much about the business of what was needed. I allowed them to underfund the company, take too much equity and lure me into bad deals,” he said. “It took me a lot of money, and a lot of time, and a lot of anger and frustration, and giving up, and depression to get out of that situation.” he explained.

He was eventually able to buy back control of Pyer Moss with the help of the Reebok deal. He cites the experience as his most pivotal learning moment. But having stepped back from the brink, Jean-Raymond is moving more cautiously this time around.

Jean-Raymond’s sensibility seems to be connected to his support system — both family and friends — continuously working in the background.

Jean-Raymond’s family immigrated from Haiti to the US, and family values remain central to Pyer Moss’ brands ethos (the label’s name is an amalgamation of his mother’s Haitian and American surnames). Both of his parents’ names are stitched into every pair of shoes Pyer Moss makes.

Although he was encouraged to “play it safe ” while growing up, Jean-Raymond said his family was nonetheless supportive of his ventures.

“They had never seen a reality in which someone that they know has made it in this field, let alone someone who looks like them,” he said. “I’m a first for a lot of people .”

“People” is one of the most frequently used words in the Pyer Moss’s lexicon. During our interview, Jean-Raymond spoke about bringing people together, overlooked people and people’s stories.

The young designer is evidently personable and, just that week, he reported being twice described as someone people like to talk to. “I must look like I’m going to listen,” he said.

The designer’s innate humanity is reflected in the way he does business: “We limit our supply to (match) the demand, not what we’re speculating,” he said. “It gets very hard to find Pyer Moss in the secondary market.

And that’s by design, because we don’t make a lot of stuff in the first place — we make what people want.

“I call this an art project but it’s a worthless art project if people are not going to take part in it,” he added. “This is a community gathering.”

DISCLAIMER: The Views, Comments, Opinions, Contributions and Statements made by Readers and Contributors on this platform do not necessarily represent the views or policy of Multimedia Group Limited.
Tags:
Fashion
Kerby Jean-Raymond
New York Fashion Week
pyer moss