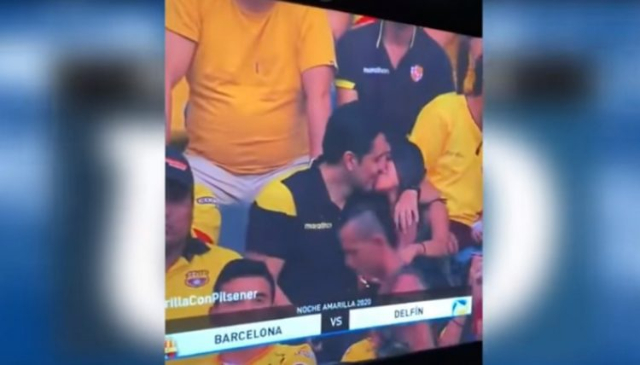 An Ecuadorian man was allegedly caught red handed cheating on his partner with another woman, when the half-time kiss cam showed them kissing in the stands during a soccer match.

Last Saturday, Barcelona of Guayaquil, Ecuador’s very own Barcelona soccer club, made its traditional yearly presentation during a friendly match against rivals Delfin, one of last season’s revelations.

It was a good game, but it was surprisingly overshadowed by something that occurred during the half-time break. The kiss-cam showed a young couple making out in the stands, but things got weird when the man saw himself on one of the jumbo screens.

He immediately removed his arm from around the young lady, his smile went away instantly, and the two just started looking in opposite directions, like they didn’t know each other.

The short clip went viral almost instantly last weekend, and has been doing the rounds on Latino social media ever since. People are convinced that the kiss-cam accidentally caught the guy’s infidelity, and according to some news reports, the man’s Facebook profile features photos of himself with another woman, which confirms that he was cheating on her.

The evidence doesn’t look to great for this guy, that’s for sure, so I think it would be safe to say that the over 49,000 Barcelona fans enjoyed their Saturday night, he most likely did not…

The woman our protagonist appears with in his social media photos apparently took to Facebook to let everyone know that they broke off a long time ago, and that the photo being shared online was old. Still, that doesn’t mean he wasn’t cheating, just not on her…

DISCLAIMER: The Views, Comments, Opinions, Contributions and Statements made by Readers and Contributors on this platform do not necessarily represent the views or policy of Multimedia Group Limited.
Tags:
Ecuador