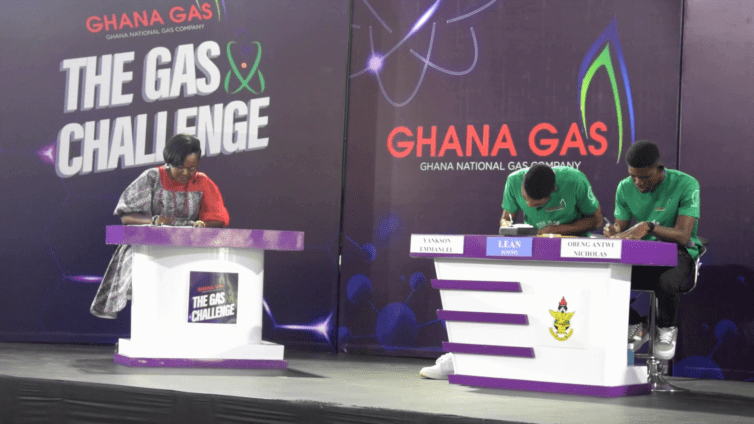 The Kwame Nkrumah University of Science and Technology has secured the second slot at the grand finale of the second edition of the Ghana Gas Challenge.

They outwitted their contenders from the University of Energy and Natural Resource (UENR) and All Nations University (ANU) to win the Zone 2 contest of the challenge.

After rounds of a competitive outpouring of wits, the Lean team of KNUST, who were trailing to the LNG team of UENR, managed to carry the day.

They won the heated contest with a slimmer margin of 2 points ahead of their closest contender who garnered 66 points.

The Pentane team of ANU, who came third, scored 45 points at the end of the contest.

The KNUST contestants, Emmanuel Yankson and Nicolas Obeng Antwi, disclosed they were taken aback by the performance of their closest contender.

They have however forewarned other seeded universities to expect a competitive grand finale as they are poised to clinch the championship title.

“At the end of round 2, it didn’t seem a victory for us. We weren’t expecting this competition. They were leading us from Round 1 to 4.

“We were a bit relaxed before the competition because we thought we will be winning this easily. But, they gave a tough competition than we least expected.

“In the last edition, we lost the championship by a point to the winners. So, this year we are coming prepared. So no matter who wins from zone 3, they should be ready for us. We’re coming for the title this year,” he said.

The Gas Challenge is designed to refine society on the domestic use of gas, the economic opportunities along the gas value chain, and health and safety matters related to the use of gas.

The competition is aimed at educating the general public about the operations in the gas industry in Ghana.

“Winner of the maiden edition, University of Mines and Technology, University of Cape Coast, and the Takoradi Technical University will face off in the Zone 3 contest on November 10, 2021, to secure their seat at the grand finale,” she said.

DISCLAIMER: The Views, Comments, Opinions, Contributions and Statements made by Readers and Contributors on this platform do not necessarily represent the views or policy of Multimedia Group Limited.
Tags:
All Nations University
Ghana Gas
Ghana Gas Challenge
KNUST
University of Energy and Natural Resources (UENR)