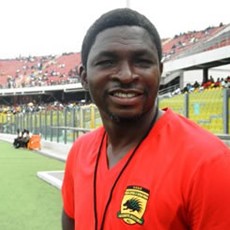 Former Black Stars assistant coach Maxwell Konadu is currently in Kumasi to sign a contract with Asante Kotoko as their new head coach.

His reappointment was confirmed on Monday, four days after Joy Sports revealed the news.

Konadu, 47, replaces Norwegian trainer Kjetil Zachariassen who was sacked few weeks ago, and has agreed a two-year, $60,000 contract a year with the club.

The former Black Stars forward has been spotted at the secretariat of the Kumasi based club this morning and is expected to sign a contract at 3:00 PM on Monday.

He will be unveiled at Kotoko’s training grounds Adako Jachie.

This will be Konadu’s second spell with the 24 time Ghana Premier League champions.

He guided them to a 22nd league title in 2012 but resigned to coach the Black Satellites and subsequently become assistant coach of the Black Stars in 2013.

Konadu was voted as the manager of the tournament at the 2019 WAFU tournament which the Black Stars B came second to Senegal in the final after losing on penalties.