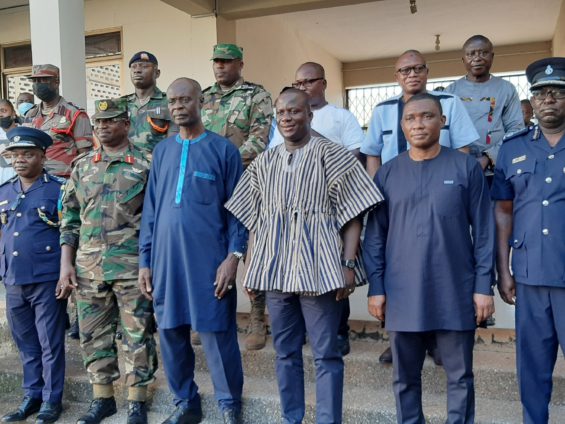 The Minister of Lands and Natural Resources, Samuel Abu Jinapor, has tasked the Forestry Commission and the Lands Commission to work out modalities to flush out encroachers on public lands in the Tamale Metropolis.

The sector minister is also calling for swipe action against encroachers of forest reserves in the area.

“We are told and it’s very evident that the forest reserves in the Tamale metropolis are being encroached upon. We cannot permit that. I am counting on your support for us to come to grips to deal with this matter,” he said.

Mr Jinapor said the regional Security Council will map up a strategy to clear off all the encroachers along the forest reserves.

”A city without a forest reserve is not a city that is sustainable and these reserves have been in Choogu and several other places for years and suddenly we are finding washing base, people constructing houses and blues kiosks. That kind of trend cannot be allowed “ He said

On encroachment on public lands, Mr. Jinapor said considering the rate at which the area is developing, there is the need for proper planning to ensure the area is not developed haphazardly.

“I am not surprised about it. Tamale is increasingly becoming the head quarters of northern Africa and a lot of activities are taking place. People from Burkina Faso, Mali and Niger are conducting business here in Tamale and Tamale is becoming a center of commerce for northern African so land is becoming valuable and that is why we also need to preserve the public lands of Tamale and Northern Region. That is why Tamale must develop according to a mapped out scheme so that it doesn’t become the usual haphazardly development,” he added.

Mr Jinapor gave the directive when he met with staff of the various agencies under his ministry in Tamale. The meeting formed part of his five-day working visit to the five regions of the North.

The minister is on tour with his deputy, George Mireku Duker and a Deputy Chief Executive of Forestry Commission, Mr Sulemana Nelson Nyadiya.

The five-day working tour will take him to the North East, Upper East, Savanna and the Upper West regions. He will meet with various stakeholders and agencies under the ministry

Mr Jinapor who also called on the YaNa said land management in the country cannot succeed if chiefs are not involved in its management.

He said chiefs have always played a critical role in land management even before independence. “Traditional authorities are the custodians of the land so I seek your support to preserve the landscape and forest of our country,” he said.

The Paramount Chief of Dagbon YaNa Abukari II pledged his commitment to support the Ministry in its fight against illegal mining and deforestation under his jurisdiction.

The Northern Regional Minister, Alhaji Shani Alhassan Shaibu said several encroachers have been asked to stay off some lands whiles investigation are conducted to ensure proper acquisition of these lands.

He also raised concerns over the high rate of felling of trees in the area adding that it is depleting the already savanna area.