Man runs 90km to ask woman to marry him 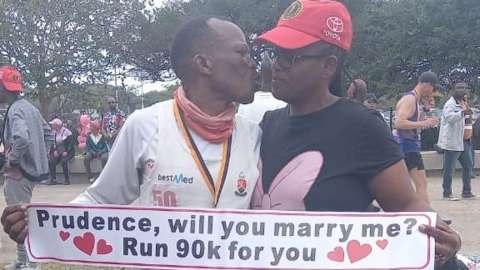 A man who literally went the extra mile to prove his love for his woman has set online users in a frenzy and has been trending on social media.

He was pictured holding a banner asking the woman to marry him, as he approached the finish line of the Comrades Marathon on Sunday.

“Prudence, will you marry me? Run 90k for you,” read the banner.

Local media and online users have been having a field day talking about the lengths to which the man had to go to woo his lover.

The things you see at the #ComradesMarathon2022 finish line:

Mr Ndlovu told the BBC on Monday that Prudence Dick, who was at the race to support him, said yes to his proposal.

He said they have been dating since the beginning of this year and plan to get married sometime next year.

He added that this was the seventh time he was taking part in the marathon and that she was the main motivation for his participation this time, especially after a two-year break.

Earlier, it was not clear she had accepted the proposal and some people online had been egging her on to accept the proposal.

“As a country, we deserve the answer to the proposal. Cameraman, please seek out Prudence. We are invested now”, another tweep said.

DISCLAIMER: The Views, Comments, Opinions, Contributions and Statements made by Readers and Contributors on this platform do not necessarily represent the views or policy of Multimedia Group Limited.
Tags:
Joseph Kagiso Ndlovu
Marathon
Prudence Dick
South Africa