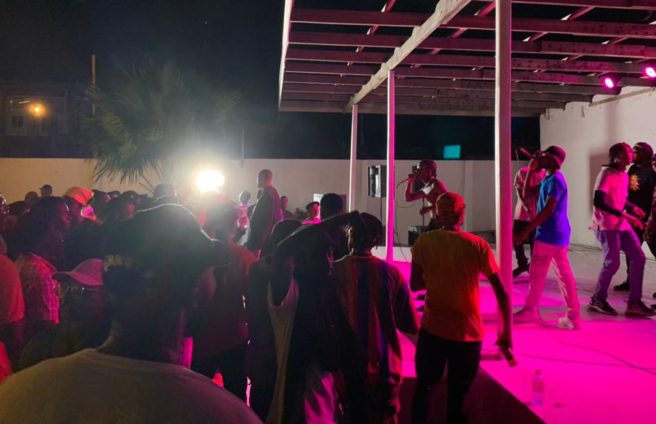 Energy, passion and good music are three words that best described the spectacle on Friday, December 3.

Fast-rising Ghanaian artiste, Marince Omario had assembled a line-up of current and upcoming talents at one of Accra’s nightlife hubs, Serallio.

The event hosted at Osu, dubbed ‘Gbonyo Party’ saw fanatics enjoying songs from a mix of genre-bending backgrounds to give fans a night to remember as the yuletide beckons.

‘Gbonyo Party’ is a slang used by the Ga tribe in Accra used to describe funerals.

The phrase is also the title of a song off his 2020 EP ‘Tsotsoo,’ a project that weaves together contemporary Ga culture and soulful instrumentals.

Marince, who doubles as a member of the A-Squad collective, explained that the event was meant to metaphorically kill off the negative energy and promulgate the rebirth of life and goodwill, hence the name.

He took the audience through electrifying performances together with others like Black Sherif and Spacely who equally rocked the stage.

Two of some of my favorite people @marinceomario and @blacksherif_ sharing a stage was madness last night. Congrats for pulling of Gbonyo Party, Marince n team🎈

Some of the musicians who performed include, Asi Renie, Baaba J, Questo, The Art, WES7AR 22, Juma Mufasa, Avit, Moffy among others.

Versatile disk jockey, Wanzam The Classic DJ was on the turntable for the night.

Talent and a Dream 💭… it only gets healthy by the second. Grrrrrrrr and that’s on greatness 🍀🍀🍀shlime pic.twitter.com/lwjG83V9y7

Social media users who were present have also hailed the concert as one that will be worth replicating every year.

Chale. Marince Omario is going to be a superstar.