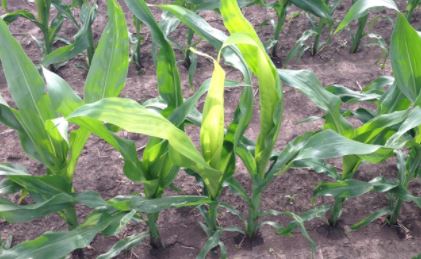 When I was growing up, it seemed everyone in Ghana was engaged in some sort of farming. On UCC campus where I grew up, every lecturer’s bungalow had a coop of chickens, or a pen of goats, or a hutch of rabbits in the courtyard.

My parents were no exception. In addition to a whole Noah’s Ark of livestock, we also grew corn in the rainy season.

We would dig up the huge plot of soil behind our house, and plant the corn neatly in perfectly straight rows. My father would walk ahead of us, digging small holes in the soil with a pointed stick, my sisters and I would follow him, dropping exactly four grains of corn into every hole, and my mother would bring up the rear, covering up each hole to protect the grains from birds so they’d have a fighting chance to germinate.

Over the next few weeks, those single grains would sprout into long green stalks, each with two or three full ears of corn growing on them. Later, when we harvested the corn and removed them from their husks, I always marvelled at how four grains of corn covered in dirt and buried in the ground could turn into thousands and thousands of fresh grains on several cobs. It was one of those phenomena that even my young mind could recognise as a true miracle.

Thinking back over all those rainy seasons of growing and harvesting corn, I begin to realise that there were two universal truths being demonstrated to me by that annual process.

The first important universal truth is that being covered in dirt is not the end, but the beginning.

Sometimes, there are certain conditions that have to be present in order for your success to be manifest, and those conditions can never come about unless your ideas are covered in dirt..

When Richard Branson launched his first Virgin Atlantic flight, he invited all the media houses in England to witness his maiden voyage into commercial air travel. He turned the whole event into a greatly hyped ceremony with pomp and pageantry, parades and the likes. The aircraft crashed back down to earth seconds after taking off.

Instead of a triumphant moment, the Virgin CEO was humiliated. The press had a field day, laughing at him and asking if anyone actually expected a man who sold music for a living to successfully manage an airline. Branson sunk into a deep pit of depression, but not for long.

The Virgin CEO learnt a vital lesson: test your plans, hopes and dreams before you share them with the world. People who hear the ambition of your vision will want to offer an excuse as to why THEY haven’t tried to achieve it themselves. The best way to protect your idea, is to keep it safe, buried underground where it can grow roots and gain nourishment, away from your critics, who, like the birds, are looking for chances to peck at the seed of your idea.

Thankfully, Richard Branson persevered beyond that huge initial obstacle, and kept his future plans buried and away from the pecking beaks of his enemies. Today, we have Virgin Airlines flying to every continent in the world. It wouldn’t have happened if Richard Branson’s dreams hadn’t been thrown into the dirt and buried.

We all want success and good fortune. We all want to make it in life, but often sit around waiting for that one big break to come our way. We don’t always realise that that fabled big opportunity will not come if we don’t create it ourselves, out of the dozens of small opportunities we find around us everyday.

It’s a new day. A new beginning. Let us jointly and severally resolve to stop letting real chances slip us by while we wait for bigger ones to come along.

My dear friend, let us give our hopes and dreams another shot at becoming reality. Let’s give our ideas the best conditions to grow roots, and let’s grow some big opportunities from the small ones we see around us every day.

My name is Kojo Yankson – cover me in dirt and watch me grow.