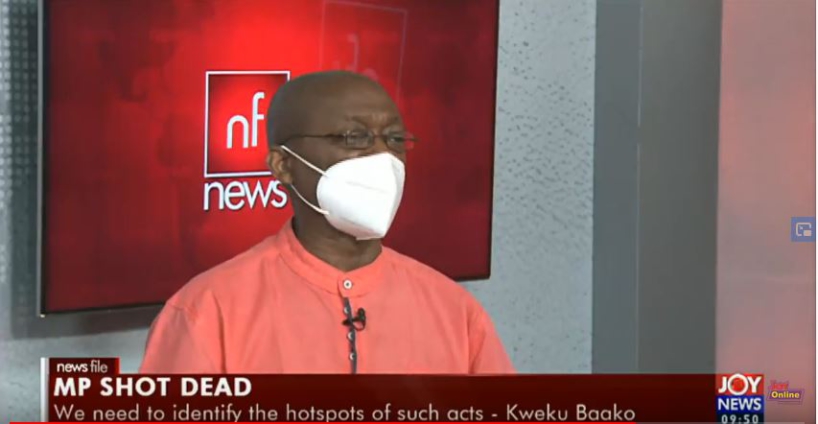 Editor-In-Chief of the New Crusading Guide Newspaper, Abdul Malik Kweku Baako, has suggested that the country’s security personnel need to identify the hotspots of crime-related activities.

Speaking on Joy News File, Saturday, he explained crime, murder and robbery creates major panic in the public, especially in an election year, hence the need to fish out hotspots and hot times of perpetrators.

“In view of the fact that we have limited capabilities and resources, relative to police operations, we should be, by now identifying hotspots and hot time,” he said.

His comments follows the recent murder of the Mfantseman MP, Ekow Quansah Hayford, on his way back from a campaign in the Constituency.

He indicated that armed robbers may be put to check with the presences of the police such areas as it may scare them off.

“When armed robbers know that there is this security or mobility in these areas, it serves as a certain deterrent, I am not talking absolute terms but it could help,” he noted.

He however noted that MPs need to have a residential protection, adding that although “it is a bit challenging, it is not impossible to operationalise”.

Kwaku Baako touched on a statistics from 2012 to 2018 research by African Institute on Crime, murder and robbery, and revealed that it is not so much of the absolute numbers involved.

The veteran journalist said as the police are limited in terms of resource capacity and also in terms of numbers, there is a need for the country to fish out areas of such incidence.

“We all know we are still struggling to meet the UN standard which is supposed to be 1 for 500” but identifying these spots could scare of such acts.

Kweku Baako also advised MPs to have protective ideas, but cautioned that in the quest to get personal protections, they should ensure that it does not accumulate into a vigilantism group.

“You can have a personal security if they are individual, but there is a risk of them transforming into a group; that is the temptation and indeed that is how some of these vigilantism group started,” he said.

He, however, noted that it should also not “stop us from finding or getting intelligent ways in collaboration with the state” to ensure that the country achieves that.

He noted the even though the request for protection for members of parliament are rear, there is always an opposition when the issue is raised.

“Each time it happened, the issue of security, protection for members of legislature comes up but there is an encounter, and the counter don’t come from just the ordinary people but also security analyst,” the editor noted.