The situation in northern Mozambique is worse than thought, a UN spokesman says, days after Cyclone Kenneth ravaged the country.

The system struck the Africa nation on Thursday with winds of 220km/h (140mph) which flattened whole villages.

Around 700,000 people are now thought to be at risk in the area as torrential rains continue.

Office for the Co-ordination of Humanitarian Affairs (Ocha) spokesman Saviano Abreu said the situation in the towns of Macomia and Quissanga was critical, adding that there were also worries for the cut-off island of Ibo.

Waves up to 4m high are expected, and aid agencies fear rains will worsen.

“We are very worried because, according to the forecasts, heavy rain is expected for the next four days,” Deborah Nguyen, UN World Food Programme spokeswoman, told AFP news agency.

“We expect the rainfall to be twice as much as that which accompanied Cyclone Idai,” she added.

Cyclone Idai killed more than 900 people across three countries in March this year.

Pemba is thought to be home to about 400,000 people, and the heavy rains have placed many in danger.

Landslides are a growing worry in the city’s Mahate neighbourhood, regional Ocha authorities said, while in the Natite neighbourhood houses have started to collapse.

The World Food Programme has reportedly begun giving out rations to stranded people, but destroyed roads have forced operations to end in the most isolated areas.

At least five people have died as a result of the cyclone, and nearly 35,000 homes have been badly damaged or destroyed, national authorities say.

Brazilian rescue teams rescued about 350 people from flooded parts of the city on Sunday. 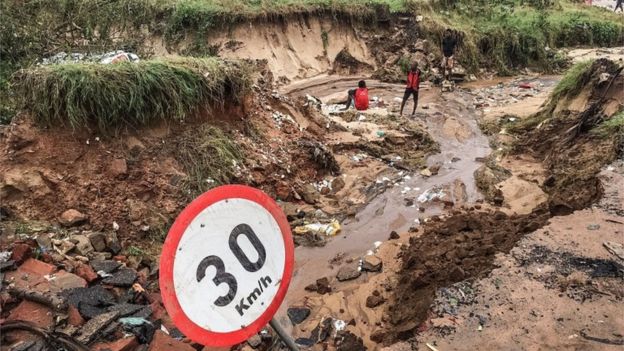 On Sunday a spokesman for UN Secretary-General Antonio Guterres said he was “deeply saddened” by the impact of Cyclone Kenneth.

UN agencies are aiding local authorities, and Mr Guterres appealed for “additional resources” from the international community “to fund the response in the immediate, medium and longer term”.

Cabo Delgado province is not as densely populated as the area hit by Cyclone Idai, and there is apparently more high ground there.

That, in addition to warnings by authorities ahead of the storm, could significantly stem losses compared with Cyclone Idai.

But reports said many thousands of homes had been flattened by the winds, and the area has been hit by militant Islamist violence in recent months, which could complicate humanitarian operations.

Thousands of people had already fled their homes to seek shelter from violence in camps for displaced people.