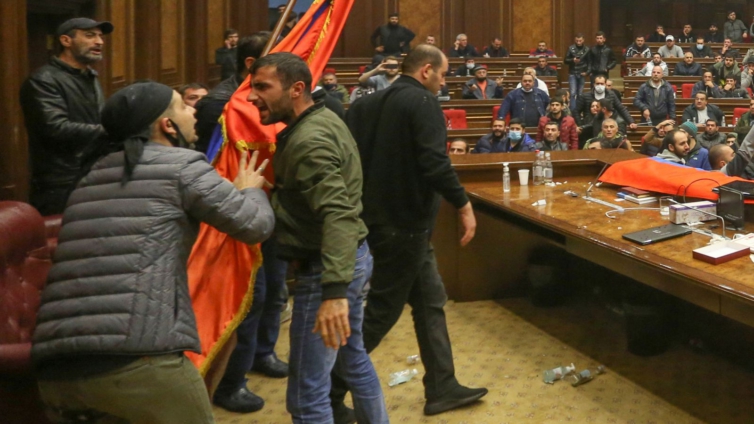 Arguments and scuffles have broken out in Armenia’s parliament as protesters angry at a ceasefire deal with Azerbaijan seized control of its chamber to denounce the country’s leadership.

Hundreds of people stormed the building in the capital Yerevan after Prime Minister Nikol Pashinian ordered an end to six weeks of fighting with Azerbaijan over the Nagorno-Karabakh region.

Mr. Pashinian said on Facebook that he signed an agreement with the presidents of Azerbaijan and Russia to halt the fighting that has raged since late September.

Several thousand people are feared to have died since the conflict began on 27 September in the breakaway territory – internationally recognised as part of Azerbaijan but populated and controlled by ethnic Armenians.

He wrote that the decision was “extremely painful for me personally and for our people”.

He added: “The decision is made basing on the deep analyses of the combat situation and in discussion with best experts of the field.

“This is not a victory but there is not defeat until you consider yourself defeated.

“We will never consider ourselves defeated and this shall become a new start of an era of our national unity and rebirth.”

Soon after the announcement, thousands of people streamed to Yerevan’s main square to protest the agreement, many shouting: “We won’t give up our land!”

Some of them broke into the main government building, saying they were searching for Mr Pashinian, who apparently had already left.

There were fights as protesters tried to take to the podium to speak and were shouted down, with some throwing bottles.

The AFP news agency reported that the few police present did little to prevent the disorder and people roamed the hallways, where doors had been opened and the contents of offices thrown about.

Meanwhile Azerbaijanis have been seen celebrating on the streets of Baku.

The Nagorno-Karabakh region has been under control of ethnic Armenian forces backed by Armenia since 1994.

The leader of Nagorno-Karabakh Arayik Harutyunyan said the ceasefire was unavoidable.

Russian President Vladimir Putin said in a statement that nearly 2,000 Russian peace keepers will be deployed along the front line in Nagorno-Karabakh following the agreement.

He said he hoped it “will set up necessary conditions for long-lasting and full-scale settlement of the crisis”.

Azerbaijan President Ilham Aliyev confirmed the deal has been signed.

The fighting had raised fears of a wider regional war, with Turkey supporting its ally Azerbaijan, while Russia had a defence pact with Armenia and a military base there.

Three ceasefires have failed in the past six weeks and Azerbaijan’s superior weaponry and battlefield gains had reduced its incentive to seek a lasting peace deal.