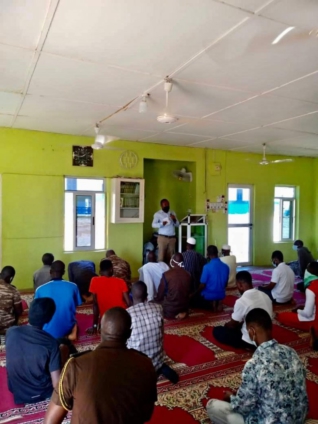 Ayawaso West, NCCE Director, Mr Edem Afeeva, who led a team of civic educators to engage the Muslim Community at the Prison explained that religious tolerance was the muster key for peaceful co-existence of all religious groups.

He emphasised that development only took place in an environment of peace and unity, but violence set the clock of progress backwards as it destroyed both lives and property which leaves the state poorer.

Speaking on the theme; “We Are One, Ghana First,” as part of the celebration of the 2021 Annual National Constitutional Week, the Municipal Director said, nationality and unity of Ghana was threatened by religious fundamentalists who do not respect the rights of others to practise their chosen faith.

Mr Afeeva said, when sovereignty was misused, democratic institutions were obliged to rise up through campaigns to whip all in line for collective peace and development.

“The threat to national security and state security is not only caused by unbridled desire of politicians to attain political office through illegitimate means such as the use of political vigilantes,” he said.

Mr Afeeva said the annual Constitution Week Celebration was one of the flagship programmes of NCCE which was instituted to commemorate the country’s return to democratic rule after many years of military interruption in system governance.

He noted that on April 28, 1992, Ghanaians voted massively in a referendum to adopt the draft Fourth Republican Constitution, which came into effect on January 7, 1993.

He added that the maiden Constitution Week Celebration was 2001 and had always taken the form of engagement with various sectors of the population such as civil society groups, communities and security services.